Not long after Mr Point Five and I met we were at the shops and there was a sign for a Jack Russell in the window of a pet store. Hubby turned to me and said with these puppy eyes I have always wanted a Jack Russell and I know what I would call him: Pawthos.

Needless to say, we came to the shops sans canine and went home with an extra heart on board. 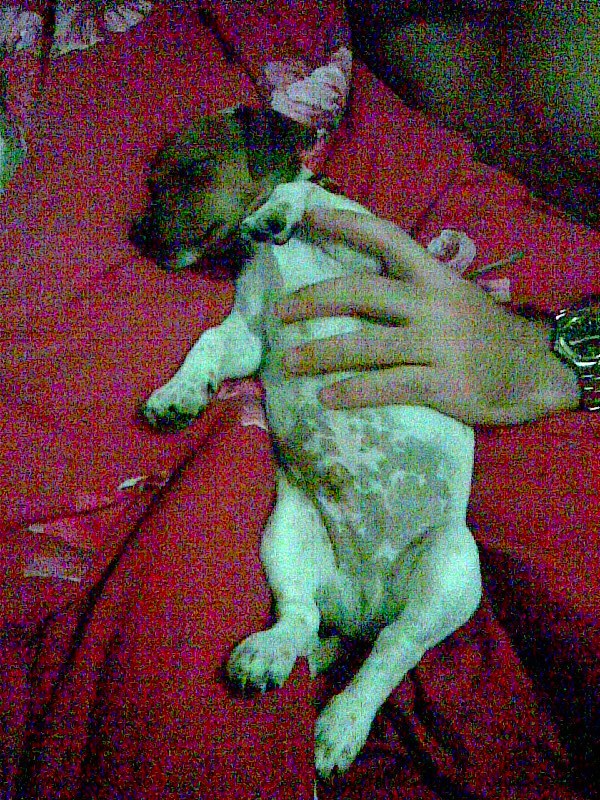 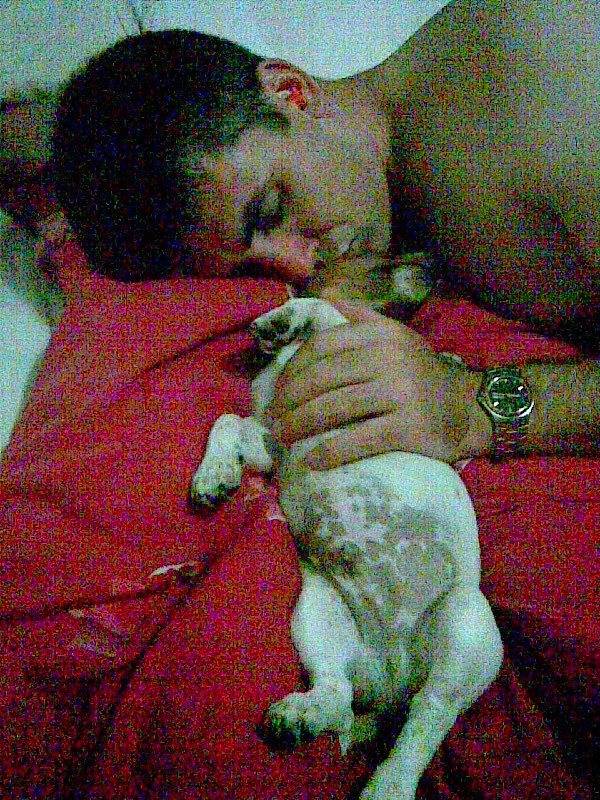 Scuse the grainy pics – these were taken on my not so smart phone back in January 2007. Pawthos had us both wrapped around his little paw from the get go. 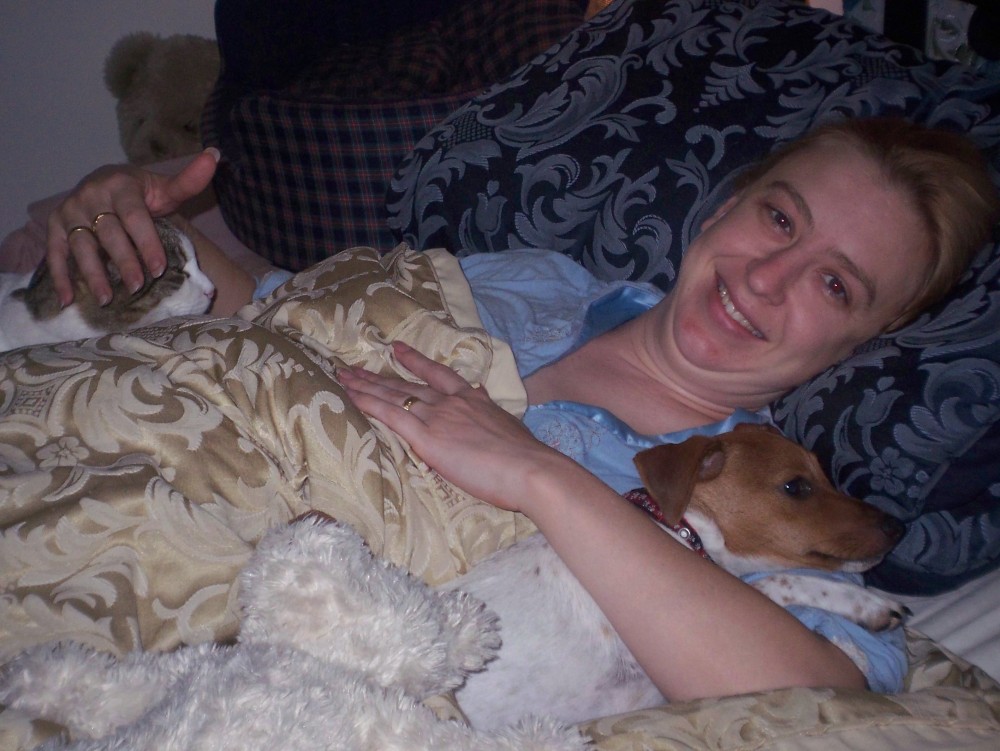 Sprung in bed one morning with the two pets and a terrible double chin. Gemma the puss is currently sunning herself up with hubbys parents in Onslow at the ripe old age of  15. 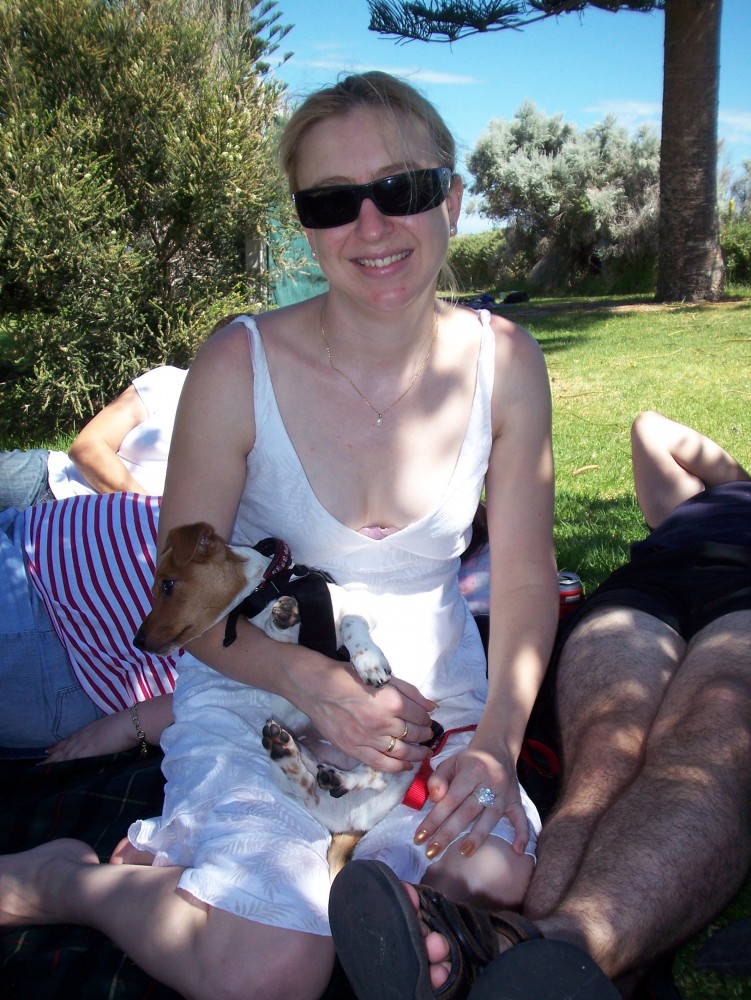 We took him everywhere, on occasion refusing to go places that friends had asked us to if dogs weren’t allowed. 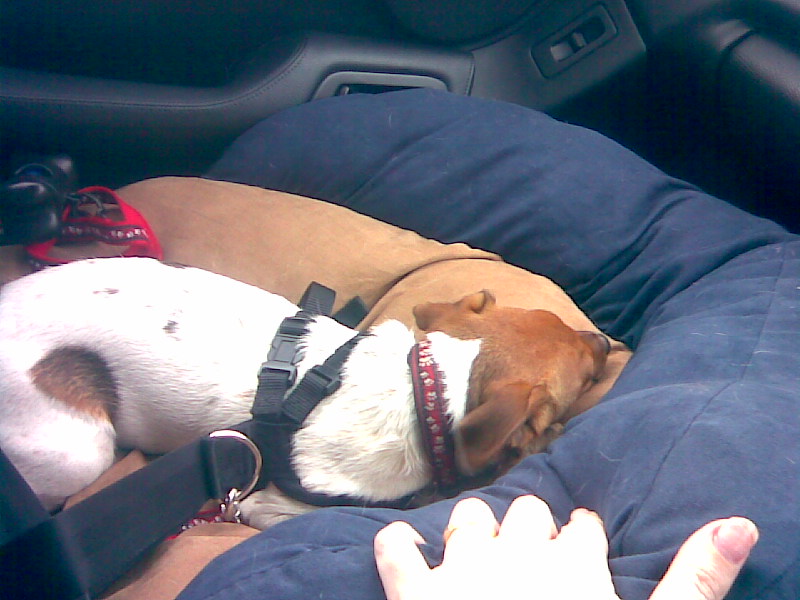 When we lived in Perth whilst hubby was at the WAPOL Academy and I had a full time job (before kids), I used to take Pawthos to Doggy Day Care once a week, on a Wednesday. Yes, you read that right; Doggy Day Care 🙂 I was worried he was getting lonely at home all week, whilst we were doing the DINK thing. This pic was taken on the drive home where he would pass out within seconds of pulling out the driveway – shattered from a day full of playing with the other dogs. 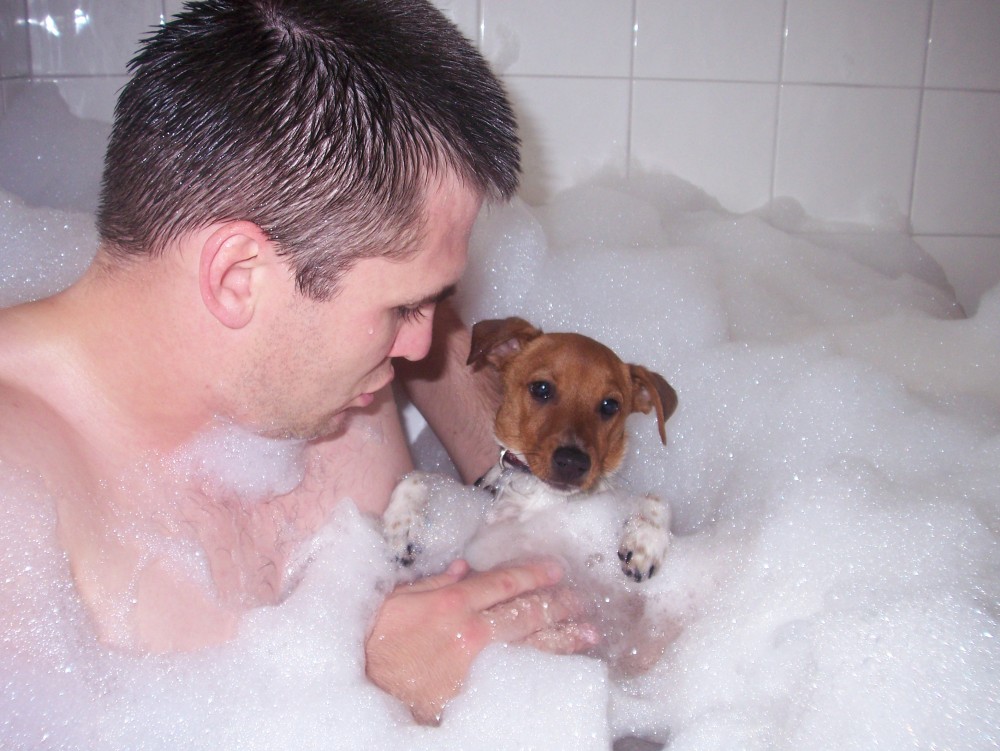 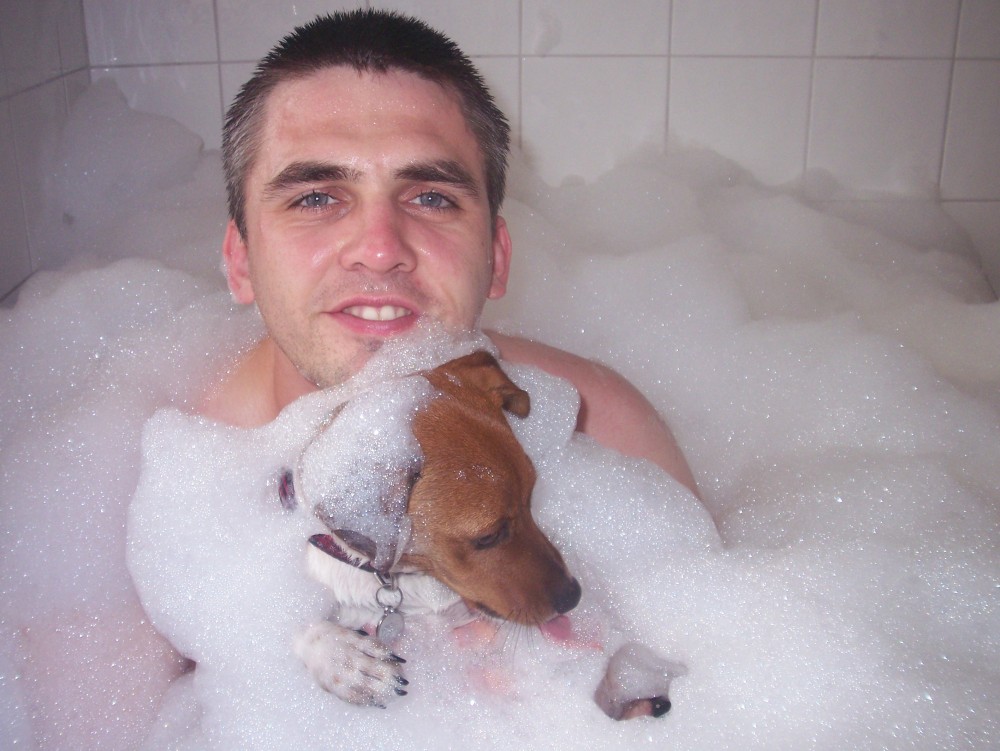 These photos were taken in a holiday house down in Margaret River. I did a lot of research to find places that accommodated pets as well, and as you can see he was spoilt rotten. The night Mr Point Five graduated from the Academy, we booked a room at a Hotel for the night. I also asked one of my friends if he would come and stay the night at our house as I didn’t want Pawthos to be left alone overnight. Looking back, I am rolling my eyes at myself, but that’s how we were with him. He was really our first baby, our token child. He was totally loved and adored. 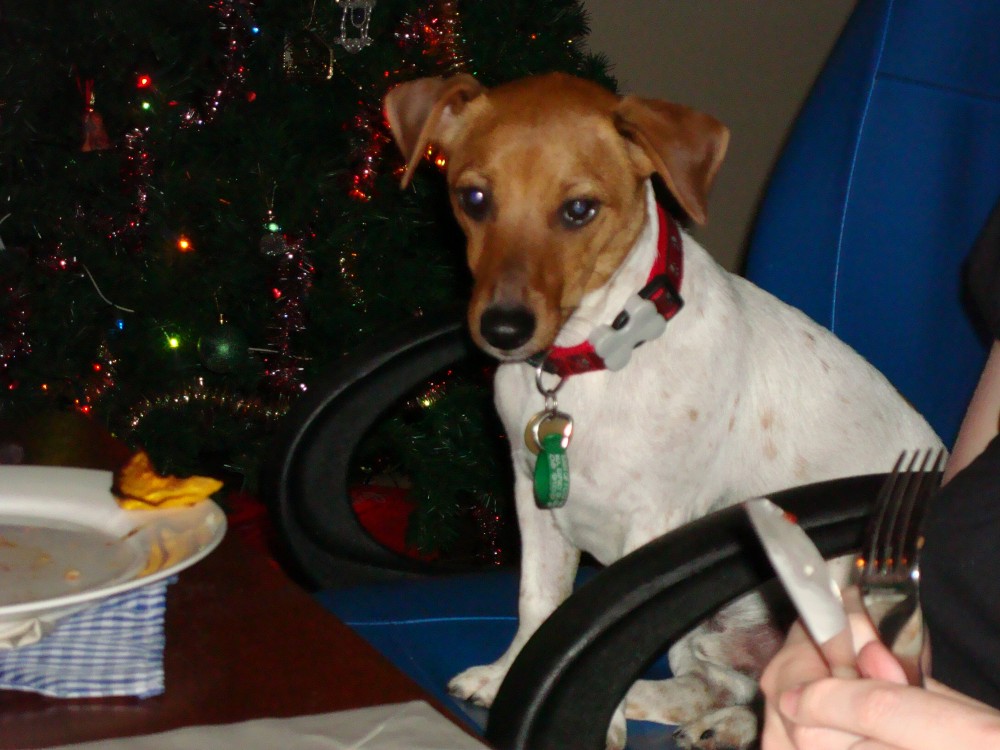 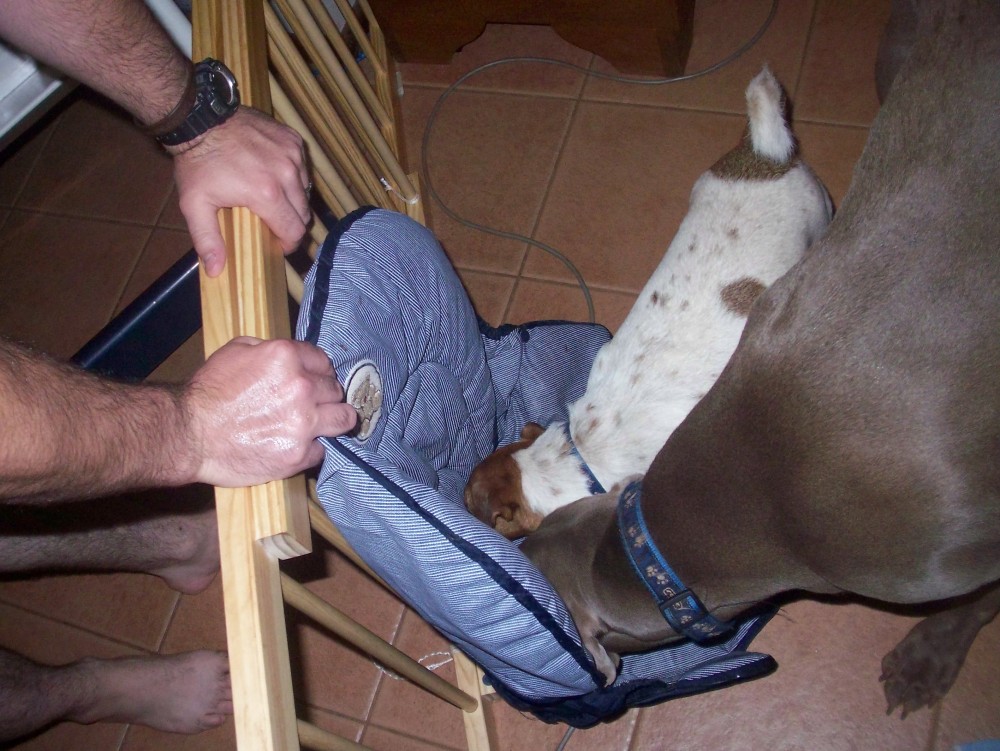 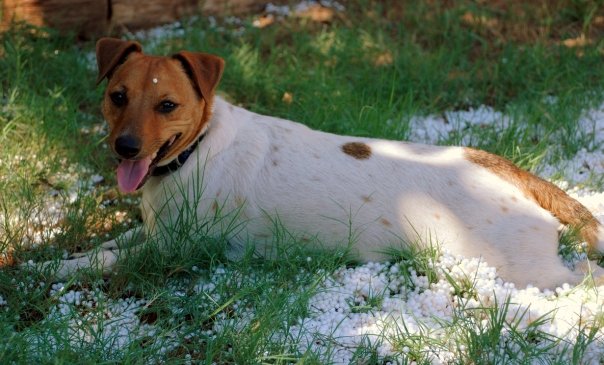 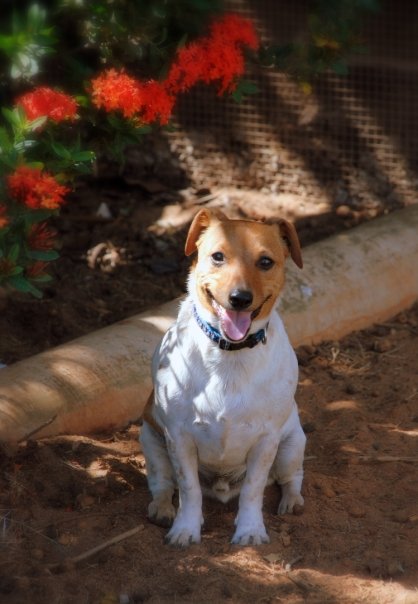 These two photos above were taken by a friend up in Port Hedland; such a happy little dog. The top one of the two was when he had busted open a beanbag in the backyard, cheeky sod; there were beans everywhere! 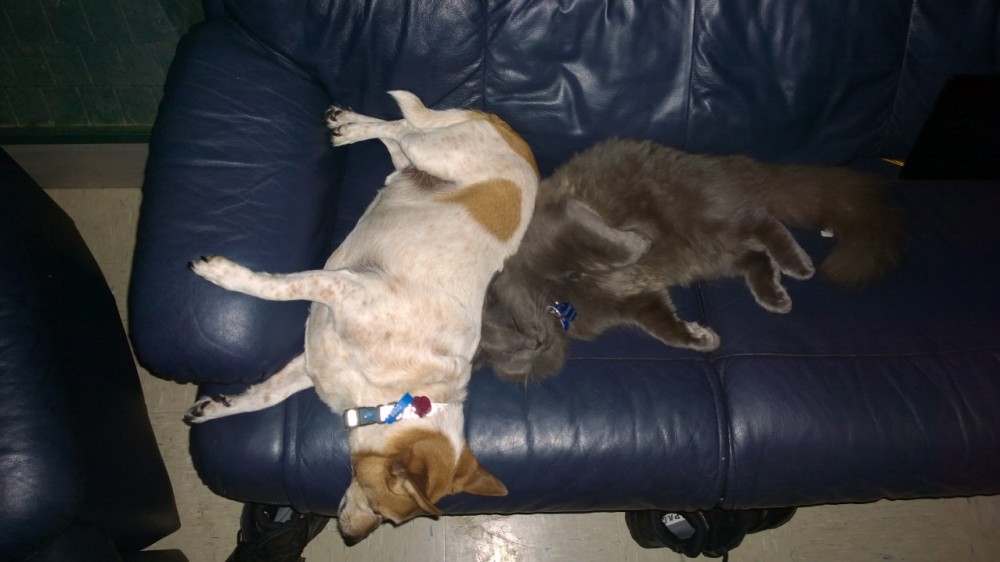 Fast forward a few years and we find a slightly robust Pawthos, aged seven. When we first moved here, Pawthos got out and made it as far as next door where he plopped himself in the driveway. Fortunately for him, it was the Rangers house whom I rang a few hours later when we realised he was missing. Have you picked up a Jack Russell today I enquired, as Pawthos didnt have a name tag on at that stage. Is he well fed and more than slightly rotund the Ranger replies? Yes, that’s him I nod eagerly and the the Ranger bought him over. 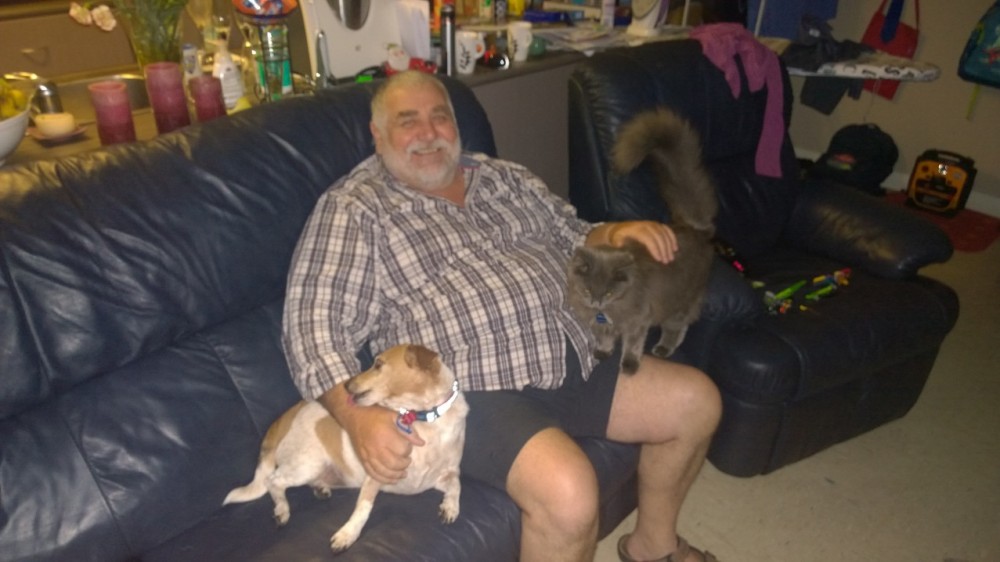 Granda adores Pawthos and I am always admonishing him for his fervent patting of him which leaves dog hair in MASSES all over our couch. I hoover it up and five minutes later there is hair everywhere again. I think Granda and Pawthos were each others biggest fans. Much tail wagging when Granda came to visit. 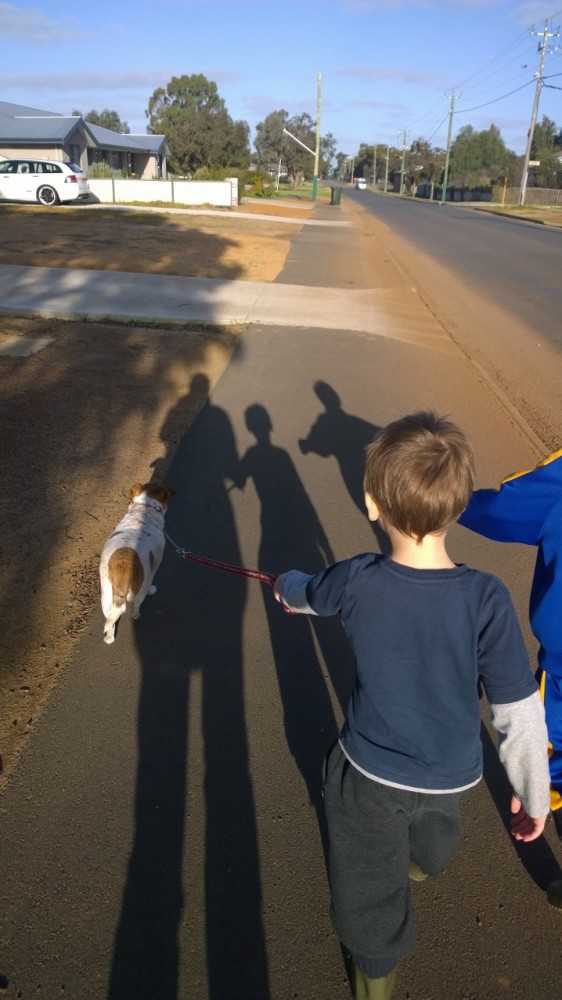 Pawthos tore his cruciate ligament a few years back, jumping off a friends back verandah and we were instructed not to walk him for a long while (hence the rotundness). But lately with his stress-weeing behaviour we decided to take him out and the past few weeks the boys and I have really been enjoying our walks with him. So much SNIFFING from one little dog and so much WEEING! He was marking his territory every few metres – totally hilarious to see what goes on inside a doggy mind. 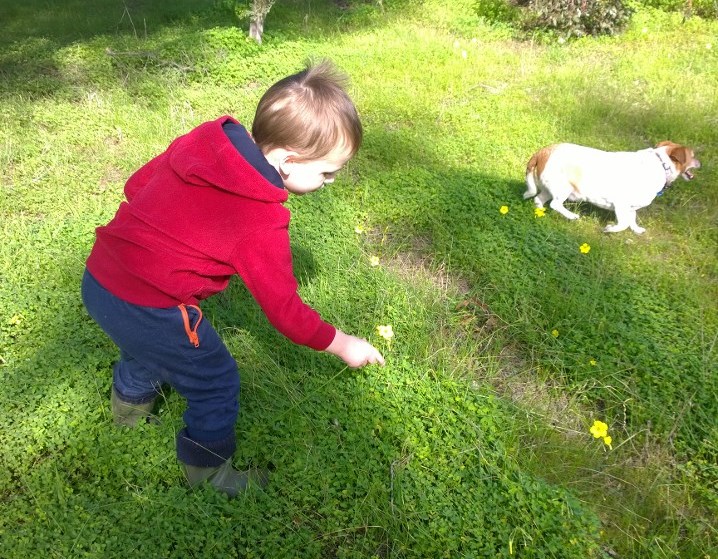 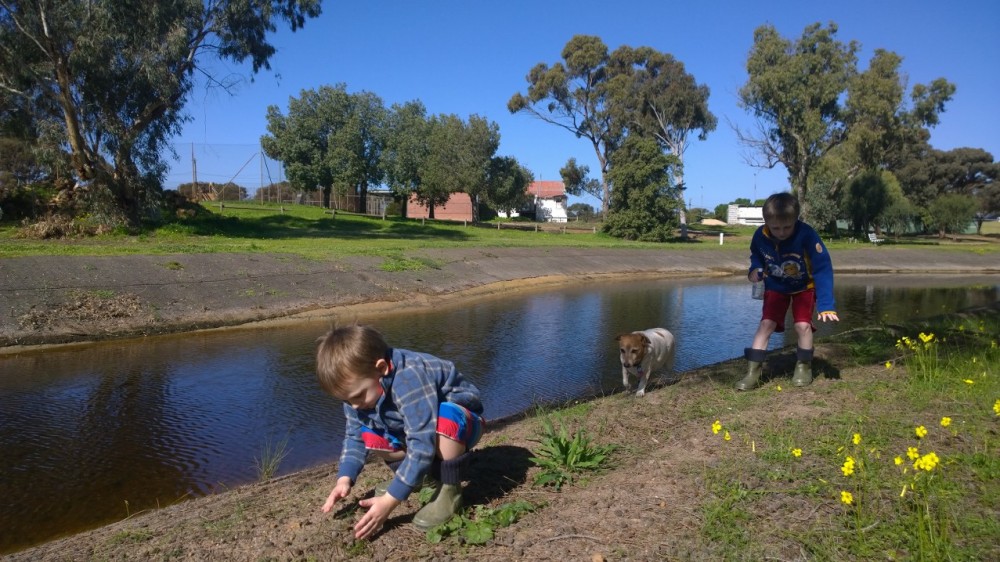 This photo above was the last photo I took of Pawthos, on a walk with the boys last weekend.

Last Wednesday he got out and was hit by a car and died instantly, aged nearly eight.

We didn’t know how to tell the boys.

We eventually told them that he had indeed been hit by a car but that he was at the doggy hospital. 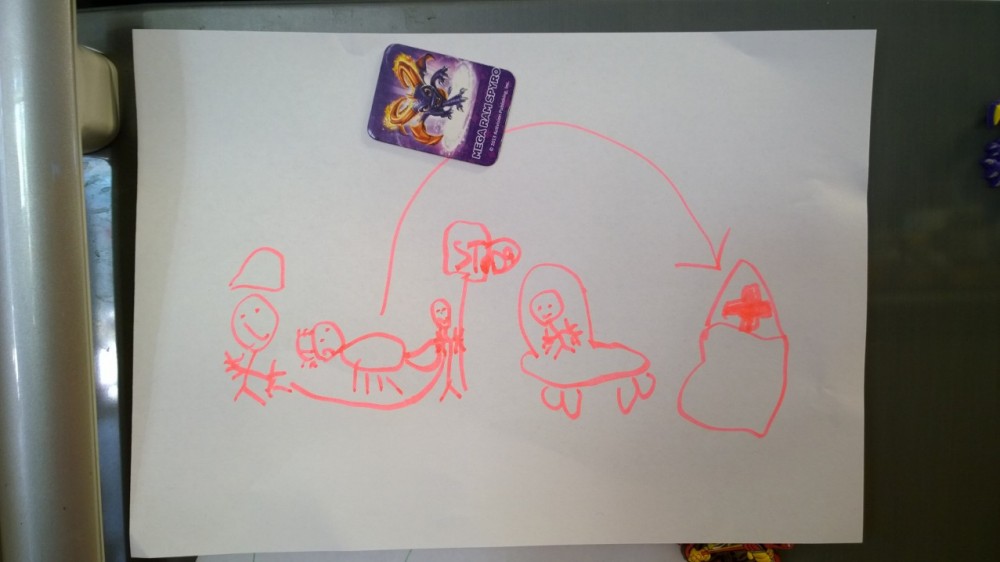 G Man drew this picture this morning, a few hours before we broke it to them that the vet hadn’t been able to save him and that Pawthos was now in Doggy Heaven.

Well, its up above the clouds, I said, and there are lots of Doggies up there. There are treats on every bush and bones behind every tree. There are balls and open parks.

Well, he is up there playing and running, and eating and digging holes in the clouds.

Mummy, when it rains, do you think its the doggies in Doggy Heaven who might have dug a bit deep in the clouds?

Well, yes, I think that very well could be the case, I agree, smiling.

But Mummy, there are no clouds today! (said with a tremble and a tear) Where is Pawthos??!?

Pawthos is always up above the clouds Darlings, he says. The clouds are always moving around the Earth so when you don’t see any in a clear sky, then you know Pawthos is off on a big adventure around the world with all his new Doggy friends. He will be back when the wind blows him close to us again. 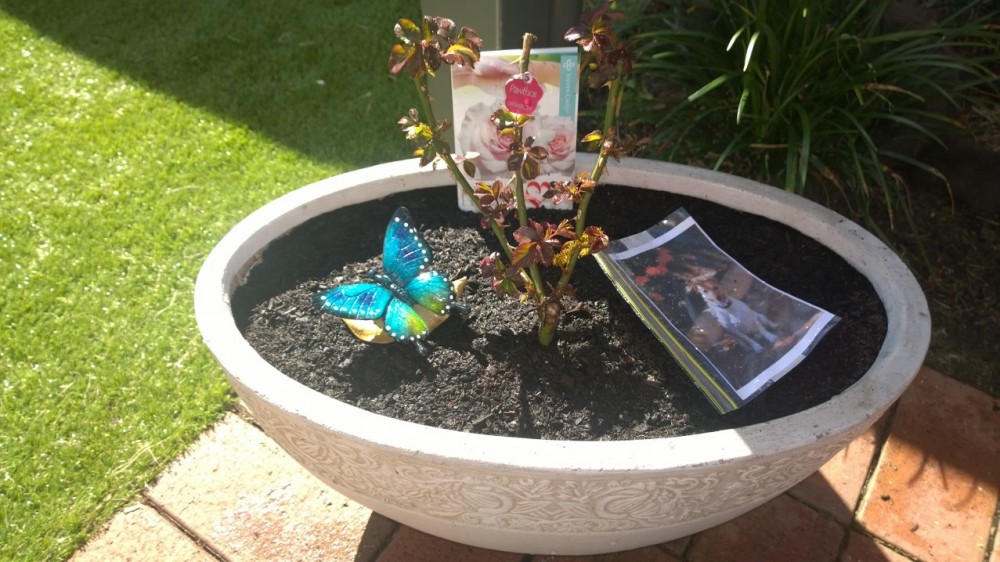 We went and bought a rose plant to remember Pawthos today.  We put it in a pot so that we can take it with us when we move.

G Man chose it; its variety is called Linked Hearts. Mummy I want that one he said when I read out the name.

G Man also chose a butterfly ornament so that when we are asleep the butterfly can fly up to see Pawthos and tell him what we have been doing.

We hung his name tag from his collar on the rose and I put a photo of him in a sandwich bag so it doesn’t get wet and we attached that on as well.

We wrote him a letter, telling him that we missed him, we loved him and we each recalled our best Pawthos memory in it. Then we burnt it and watched the smoke float off to Doggy Heaven so that Pawthos could read our letter and know that we cared.

The boys don’t know, but Mr Point Five buried Pawthos under the rosemary bushes right around the back of the house last Wednesday. Today I also bought some everlasting seeds and scattered them there so that every year the flowers will come, even when we have long moved house.