Two Point Five Kids September 4, 2012 Our Holiday – Part Three: the way home.2014-02-02T22:39:24+08:00 Uncategorized No Comment
So, after 10 days of living in the in-laws pockets we are on our way home. With the in-laws. Yep. They had to drive down to Perth and so we coordinated this part of our trip to piggy back down the coast with them. My poor Mother-in-law. She left the accommodation up to me and I married her son…. Who is a tight arse and wouldnt let me book anywhere good.
So you saw her house and all her pretties up in Onslow from part two and gathered she was fairly high maintenance yeah? Well I realised this as well but didnt really appreciate it until out trip back down when we stayed in the shittiest little “self contained” villa in Shark Bay. It was cheap. Very cheap and nasty and I felt really bad as she wanted to stay here. Oh well. She blames me and I blame her son. I win. 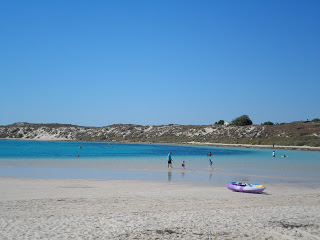 Anyway – our first night was Coral Bay, about 450km south. It was beautiful!!! The beach is perfect for the kidlets as it had 100m or so of shin-deep water just to paddle in with no waves at all. If you had bigger kids (or better yet, no kids) then you can snorkel out as this shallowness then drops off to stunning coral underneath – just magic!!
In the morning we went on a glass-bottomed boat for an hour. I have very vague memories of doing this as a kid with my parents and I really wanted to share it with my kids as well. Hubby had never been on on either so it was new all round 🙂
After the cruise we started the long drive to Shark Bay, about 550km, arriving about 430pm.
This was the night of the god-awful accommodation which I am sure will be the butt of many a joke in years to come. My poor Mother-in-law. 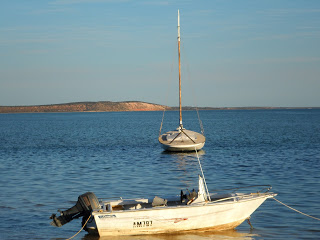 Next morning we drove the 25km across to Monkey Mia which is where the Dolphins are (and where the MIL had wanted to stay at the $$$ resort there). We arrived just after 830am and managed to jag some dolphin guides welcoming three beautiful dolphins to shore for one of their thrice morning feeds! 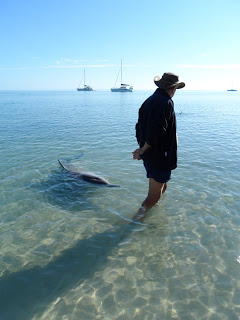 G Man was picked to feed one of the Dolphins, Nicki, and he was very nervous! What a lucky little boy – I hope he remembers this in years to come. I am going to buy a little dolphin to put on our Christmas tree so he can be reminded each year when we trim the tree. 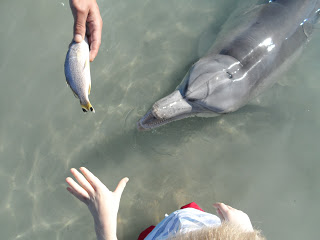 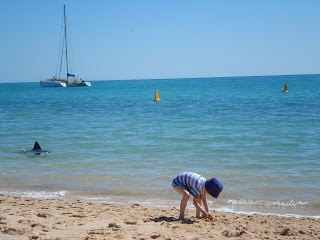 And as you would have it, two dolphins just swam RIGHT PAST G Man whist he was playing.
Just amazing!!
We left Shark Bay and stopped off at Shell Beach on the way. Its about 50km south of Denham and simply fantastic. It is a one km long pure white beach made up of tiny shells that go about one metre deep.
Amazeballs.
After Shell Beach we drove to Greenough, 480km south again for our last night. This is where I clawed back some brownie points for the accommodation as our villa was RIGHT on the beach! It was really windy though which was a bummer but the boys enjoyed playing by the water.
We left our Northern Part of our holiday here, and after a massive seafood dinner for our last night, bade farewell to the in-laws and drove down to Perth (340 km) to stay with friends for three nights.
First day in Perth my Dad and his wife took the boys and us to the Zoo. Perfect zoo weather. Cool and overcast but no rain. Had a fabulous day with Poppy and Nana. 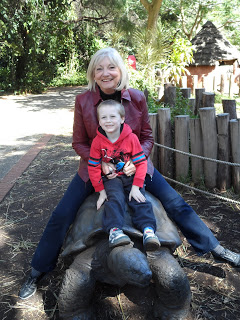 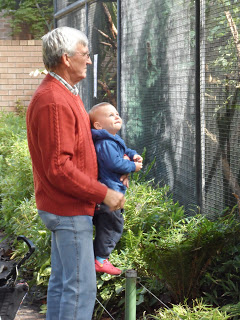 Second day we visited the Dinosaur exhibit at Scitech which was OK. G Man was well impressed with the dinos but it was a little frustrating going around the hands-on science part with Master J who cracked the total shits when he couldnt hold/take the beach ball for a demonstration. He and I were banished to the toddler part whilst Mr Point Five took G Man to the Omni movie which was all about astronauts and exploring space which we knew he would love. BUT the whole concept of the way it was set up was too much for a four year old and he burst into tears so it was an early exit all round. I think Scitech will be better in a few years 🙂 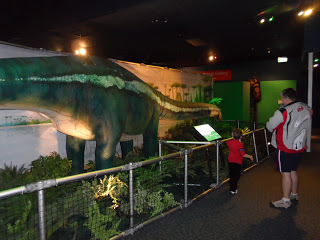 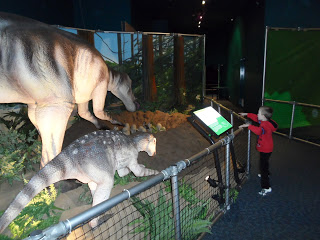 After Scitech we met my Mum and her hubby at  the shops for lunch where the boys were spoilt with these horsey-ride things each which they proceeded to gallop around the shopping centre, much to Mums amusement and delight. 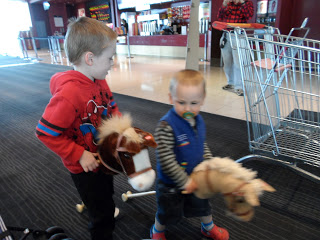 The next day was home day after a quick stop in to get the pooch and say goodbye to the in-laws.
Plus a surprise for G Man from cousin Zach – his first Start Wars Lego!! What a moment! 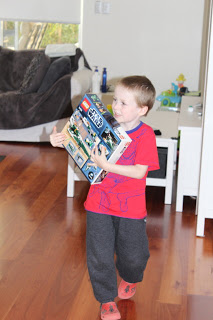 360km later we were home – driving down Albany Highway the canola fields put on a show – truly magnificent and each field outdid the next. 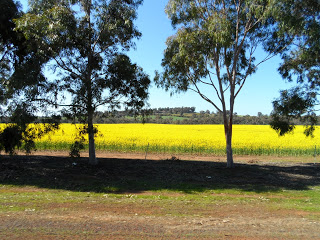 So that was our three week holiday for you.
Hope you enjoyed the pictures.
Today it hasn’t gotten past 7C and it has been hailing in patches with a ferocious wind to boot.
Ugh.
Still, at least we have beautiful holiday memories and snaps to be reminded of happy family times.
Next time I will let the MIL book the accommodation too.
And pay for it 😉