Here are my top three things that Mr Point Five currently does or has done under his new mantle of parent that make me shake my head with amusement, annoyance and total wet-my-pants laughter.
1. He never checks what’s in the nappy before he takes it off for the bath.
Now to me this is common sense, not as a mother, or a woman, but as a PERSON WHO DOESN’T WANT TO GET POO ON THEIR HANDS AND EVERYWHERE ELSE. Maybe its because I am the chief nappy changer in the house and I have ESP when it comes to them and their contents but it is my prerogative to NEVER take a nappy off without knowing what is in store for you. Never. I used to put it down to a common rookie mistake but over four, yes that’s right, four years later of parenthood I still hear a plaintive cry from hubby in the bathroom “Honey, I did it again. Can you get me the wipes??? QUICK!!!” 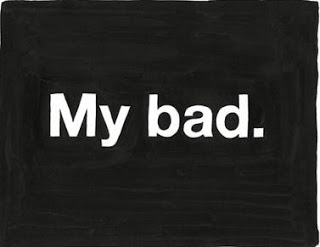 2. He never checks to make sure he has a towel in the bathroom before he hops into the shower
This is not so bad in our house now but where we used to live, we had no en-suite, and as his towel was inevitably to be found in a wet heap on the bedroom floor, he had to traipse down the tiles hallway leaving wet slippery footprints all down the house. Every. Single. Morning. This didn’t really bother me before the kidlets, I often used to laugh at him sauntering naked down the hall, but when the kids were just starting to walk it was a major hazard and it annoyed the bejesus out of me. Now that the kids are older I am just simply amazed that he STILL does it. Seriously. 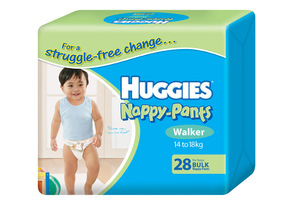 3. Got covered arse to head with poo after his first experience with a Pull Up nappy.
(only ever did this once and I wet myself laughing as he was telling me about it)
This is actually a dual story as I got caught out first but the funny, hilarious thing is that he did it second.
Pull Ups should come with a little quiz on the front of the box that seal it so you HAVE to pass it to open it. Now I know most of you are probably more pull-up savvy than me but as the nappies are already done up when you put them on, it honestly didnt occur to me that they undid at all. I just assumed that you pulled them down the same way you pulled them up!
This is fine if its just a wet nappy you are changing but when it is a runny version of a large number 2 it would have been handy and not so messy if I had done the quiz. I pulled it down and got my poor darling boys legs covered in poo, the carpet he was standing on, my hands, my wrists, his feet…..yep. It was total disgustingness which took about 11 nappy wipes and shower for us both to remedy. It was only as I was wrestling it down his leg that I felt the tabs at the side give a bit and upon further investigation post-poo explosion, I discovered how they were actually intended to come off. I cannot begin to tell you the profanities that exploded from my mouth!
So anyway, the next day hubby was baby-sitting looking after G Man whilst I was at the shops. I got a text saying BUY MORE NAPPIES AND NOT THOSE EFFING USELESS PULL UP THINGS!! I know what has happened and a large smile spreads over my face in the middle of Coles.
I get home and hubby is darker than a native coalminer in a blackout. He doesn’t like being dirty. Or poo. At all. G Man is running around naked and there are 6 Pull Ups in various sates of dismemberment on the floor. I tried to wipe the smile off my face and put on my guilty look. I apologise profusely for not telling him, forewarning him, giving him the quiz. “I’m really sorry honey, but it’s a little bit funny that we BOTH got caught out and failed the Pull Up 101 course at parent school isn’t it?” He was so not impressed with me. NOT impressed AT ALL.
I have put this one in as a shining example of a stuff-up hubby has done, but I will own it too.
But seriously – Huggies needs to put the Quiz on the box. Their slogan is “For a struggle-free change”.
Struggle-free my arse.
Give them my address – I will even design it for them.

« Meet Boris, my Nemesis.
A few delicious Minutes in Bed… »