Five things about me – Shhhhhh

I have been tagged by the lovely Jane from Almost Jane to tell you five things about myself that you prolly don’t already know yet. They’re not a secret, I don’t have any of those, they just haven’t come up in one of our conversations yet 🙂

1. I have a University degree. A Bachelor of Arts in Politics. I never went to my graduation. I had the paperwork framed and it sat on my toilet cistern for many years until it fell off with a violent flush and shattered the glass. It eventually got thrown out in one of our many, many moves over the past few years.  I never intended to get a degree in Politics; I started off doing a PR degree, minoring in politics but one thing led to another and I ended up canning the PR and just doing what it took to finish my degree, any degree, just to get out of uni as I had fallen in love with Hospitality. Politics seemed to be the easiest thing to do at the time. Pretty big waste of HECS money, but what are you going to do? I like to think that having those little letters B.A. on my resume got me a few of the jobs I applied for over the years, even if they weren’t in the political arena. All I really remember of my time studying was that ” There is no such thing as World Politics, its called World Economics – its all about the money, the politics is how to get it”

2. I was arrested for Shoplifting a bra from Aherns (then Boans), aged 18. It was a beautiful bra, pearl silk Elle McPherson,  RRP$55.00. Even though it was nearly 23 years ago now, I remember that bra in great detail, burned into my skull, or onto my chest as it were. My girlfriend and I thought we had been victorious in out petty thieving until the Police boarded our bus home that we were on in the City, demanding to know if we had anything on us that we hadn’t paid for. We were frog marched straight off the bus and back to Boans, had our photos taken and a court date booked. I told both my parents who were at court with me. My Mum wanted to know if she could bring some friends – I think she thought it was like dinner and a show.  My Dad wanted to know why I would steal something I had no use for with my size A itty bitty titties. I had paid Boans for it (they wouldn’t take it back as it has been worn) and written a letter to both the store manager and the Court Judge, apologising profusely. The Magistrate let me and my friend off, thank Christ, with no conviction recorded. Standing up in court that day was one of the scariest things I had ever done and I wore that bra until the silk shredded, lesson learned.

3. Before Children, I was a Restaurant Manager/Maître D. I earned $1000 cash for working the Y2K event at the fancy shmancy Yacht Club I was working at back then. I have coordinated stunning Weddings in beautiful venues and managed 300+ seat Restaurants which turned tables 3-4 times a night if there was a footy game on in Subiaco or a few shows at the Regal Theatre next door. I have Hostessed for 2 1/2 years at Perths Finest Restaurant, Jacksons, definitely the feather in my Hospitality cap. I have eaten the most amazing and decadent foods; you had pate, I had fois gras, and I supped on the finest French Champagne like it was lolly water.  My love for cooking was fostered in professional kitchens and my appreciation of fine wine was cultivated in the back booths of my work, in the wee hours after my shift had finished. 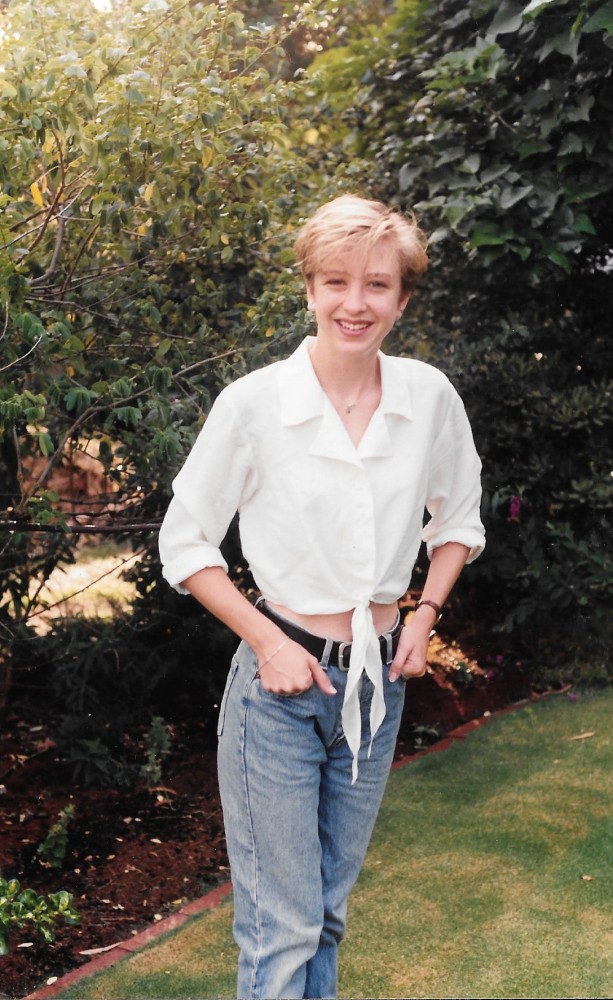 4. I cut my hair boy-short when I was 19 or so. I liked it and kept it this was for about a year, but I ended up growing it out as I could barely afford the hairspray needed to boof it out every day. I am prolly wearing that bloody Elle bra under that top too.

5. Around the same time as the haircut, I smoked for a year. My boyfriend of two years had joined the army reserves for a whole year over in Queensland and to drown my sorrows I would stay back at work every Friday night and smoke an entire pack of cigarettes.  I was working in a Restaurant which was above a cool pub and on Fridays the pub would have an amazing band. The restaurant staff finished work around 11.30ish and we would catch the last swing of the band singing “Are you gonna go my way” from upstairs, looking over the balustrades. When the pub staff knocked off about 1am there would an all night pool comp between the pub staff and the restaurant staff. The whole place was in receivership so the Pub manager didn’t really care about profit/loss etc. and there was a free open bar every night after work. We would start on sambucca and cokes and finish with port shots. We only left when the cleaners came and kicked us out at 6am. I would wake every Saturday after lunch, my mouth resembling an ashtray. It is not a time I am particularly proud of in my life, but I do remember having a lot of fun. I never smoked any other time in that year, just on a Friday night and always the whole packet. For the record, I was faithful to my boyfriend for that entire year. Until 2 weeks before he came home. The bloke who rented the apartment next door was in the AirForce. I was 19. Nuff said.  I quit smoking the minute he came home.

Right, so that’s a bit more about me than you wanted to know 🙂

Do you want to hear some deep dark not-so-secrets from some other bloggers? Me too.