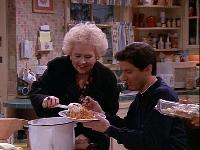 I was watching an episode (or two) of “Everybody Loves Raymond” on New Years Eve (by myself with a bottle of wine as you do with two kidlets and a working hubby) – you know the one where Deborah tries to recreate Ray’s favourite dish that Marie makes, her famous MEATBALLS. If you havent seen this episode I wont give away the ending but let me just use the word “sabotage” and remind the cooking hopefuls that tarragon is NOT a classic meatball ingredient, no matter what the label says.  Anyway, I digress. My gorgeous mother-in-law is nothing like Marie and I would have her come live with us in a heartbeat as she hates cooking (which I love) and she adores cleaning (which surprise surprise I detest)
Now the thing that peeves me to no end is, despite the fact she cant stand cooking whilst I have an encyclopaedia of cookbooks at my fingertips, my darling husband goes on and on at Christmastime how he misses his mother’s trifle. I loathe trifle and have never made it – seriously, its just slop elegantly displayed in a bowl – BUT this year I said I would give it a whirl, surely it cant be that hard?
I took the opportunity when we had interstate friends come stay with us for a night the week before Christmas to give it a trial run. I had seen a recipe from a blog I read and swear by
http://www.stayathomemum.net.au/recipes/desserts/christmas-trifle/
and it had a picture of….. 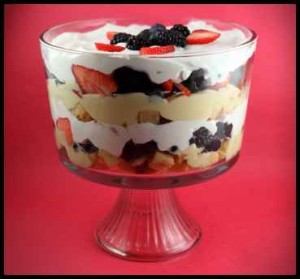 this trifle – which I thought looked PERFECT!
I gather all the ingredients and the night before our guests arrive I showed my darling husband the picture. He looks at it, sighs and says “yeeeeeeees, it looks fine”.  Now us girls know that when we say “fine” then its totally awful so I interrogate him and he eventually says with guilty reluctance, “It doesnt have any jelly. Mums trifle has jelly” Fortunately I remember that I have a packet of (diet) strawberry jelly crystals (out of date) hidden in the back of the pantry probably on sale before I had children and bought it for just in case I did eventually have them. I cannot fathom what the date could possibly implicate on a food poisoning level of sugar and food dye and the shops were closed by this time so I used it anyway and we had set jelly for the next morning’s assembly.
So, friends came over and after dinner my Pièce de résistance (which, BTW, looked JUST like the picture above, but with jelly, I swear!) came to the table and was served. It was tasted and met with very little enthusiasm or gusto by my getting to be very irritating husband. Resisting the urge to dump the contents in his lap the bin, I patiently asked through gritted teeth if he (this is to my Husband the Chef) could suggest any further “tweaks” to my recipe. To give credit, he gave it some serious thought and came up with “less cream, more sponge, raspberry jelly and just ONE layer of each”, not 2-3 layers which I thought looked more aesthetically pleasing. Oh well, I wasnt trying to impress myself – I didnt even try the damned trifle.
Sooooooo – the following week on Christmas Day I made the trifle as directed with pre-prepared RASPBERRY jelly, less cream and a single boring layer.

This was my effort – see the extra sponge (as requested) round the edge hiding the boring single layer??
Anyway, to cut a long story short what you see in the picture stayed in the fridge in its entirety for a whole week before it eventually grew legs and walked to the bin, and me vowing to never make my fussy, pedantic, beautiful husband trifle EVER, EVER again.
Or…..and this is a big “or”……as I remember the wistful, longing look on hubby’s face, should I bite the bullet next year and just ask his Mum for her recipe?
I know what Deborah did, and I know how well that went. I have a year to think on it.
Has anyone here got a favourite Trifle Recipe that would rival Mr Point Fives Mum? Cos I want to know about it 🙂
’til next time,
Lisa
xxx
Christmas, cooking, family, funny, husband, marriage, mother-in-law

« Photo A Day Challenge for January
Linky Blog – Advice to My Sons. »