Because he’s mine, I walk this line. 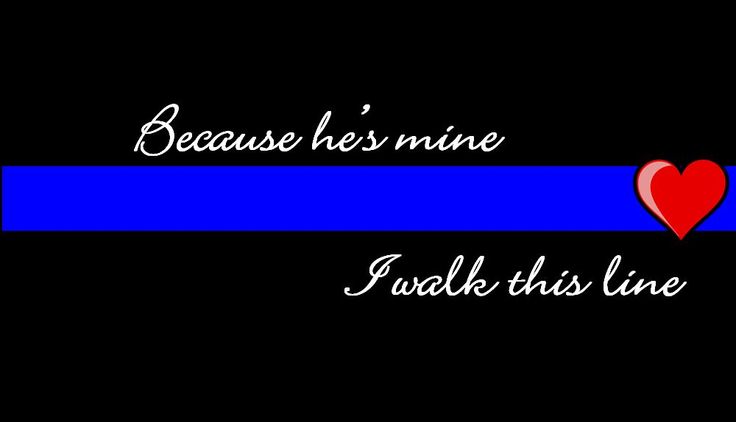 One of the aspects of Mr Point Fives job that I take very seriously, is the fact that he makes an enormous impact on the lives of others. When his phone goes at 1am I am acutely aware he is leaving us; more than likely to rescue a beaten woman and her children from her enraged and drunk husband, to pull a barely breathing body from a car wreck and start CPR until the ambulance arrives, to stop someone from taking their own life who had called the police in a last ditch effort to save themselves or any other number of “jobs” that required someone calling 000 in the middle of the night.

What many people don’t realise is the impact that being married to such a person (hero) in a small remote country station has on their spouse.

Last year my work offered me a two day course down in Perth; all accommodation and food paid for, and a real opportunity to expand my Shire finance knowledge. I was excited; after Mr Point Five going away to course after course in the big smoke with his work, I was finally being offered a really good opportunity which would be awesome for me work-wise, as well as a bit of an escape from our home town. The kids were now old enough that leaving them for more than a day with the hubby was a reality I could finally enjoy! I came home and told Mr Point Five. I could see immediate wariness in his police eyes but his husband voice said Sure, Go, its a great opportunity for you. You deserve it. I will juggle the roster so I can look after the boys for four days (two days either side travel as we lived 7 hours drive from Perth).

As soon as he said “look after the boys”, realisation clicked in my mind and immediate guilt came flooding in.  We have two children who are too young to be left alone and we knew nobody to babysit in town, or at least not one we could call at 1am if his work phone rang. If one of those 000 jobs came up whilst I was away it meant in such a small station that an officer from a neighbouring town would most likely need to be called as officers cannot attend jobs on their own. This meant at least an extra hours wait for the police to attend to an emergency situation.

Someone could die because of me.

I know that sounds dramatic and more than a little OTT but in a 2-3 man station, it is reality. If I am not home to look after our kids, and my husband cannot immediately attend to a life-threatening situation, someone could die.

Even though it was my right to attend a work course, my right to have a 2 day break, my right to look after my own needs, the rights of other strangers came first. I didn’t attend the course, and until we are stationed in more than a two officer town I won’t put other peoples lives at risk by leaving my husband alone with the responsibility of our kids, not even for a night. I have said it before; we as a couple joined the police in January 2007 and now we are a police family. I take his job very seriously and the responsibilities and realities of his job come before most things for our family.

Mr Point Five sacrifices spending birthdays, Christmas, New Years Eve, Easter and every.single.long weekend with his family whilst I am there to enjoy them all; he is constantly putting his job ahead of his wants as a husband and a father. After all of that, it’s the least I can do to support him.

Having said that there were actually NO CALLOUTS this Christmas Day, so unlike last years 33 hour Christmas day shift we actually got to wake up with him and celebrate the morning as a family of four. New Years was, well, like every New Years being married to a police officer, and so far, despite a few midnight call outs and long shifts in the first week of the New Year, we are doing just fine in our new home town. I think 2016 is going to be our year. 🙂