I want to get off the Merry-Go-Round.

When I met Mr Point Five he had already been accepted into the Police Academy for their next round of intakes. I wasn’t necessarily bothered or un-bothered about dating a police officer, (although being married to one with whom you have children is an entire other ball-game) and I didn’t really take into account much the public perception of him as a law enforcement officer. He was my boyfriend, a man with one of the best and bravest hearts I know and I knew he would do his job with the utmost of integrity.

As the years have gone past and I have witnessed him become a father twice, as well as weather the usual couple battles with me, I have a new found respect for him not only on a personal level but in his job as well. He accepts nothing less than the best and gives nothing but his all. I have seen him walk in the door from work at 4pm only to have the kids jump all over him, leave his dinner on the table as he gets a call out from 6-10pm, come home with a hug for me, then attend another call out when his phone goes again at 1am. After him arriving home at 4am, I sneak in to have a shower before work and find Master J has crawled in beside his daddy and is getting cuddles and kisses. And the JOBS he gets called out to, believe me; to see what he does, and do what he has had to do, and then come home to us with a smile and a cuddle makes him even more amazing.

We have always lived in country towns where people have known us before we even move into town. They know who Mr Point Five is when we go down to the Pub and everyone in town knows the cop houses and where we all live. We have never been threatened by this public knowledge and I have never given it much thought or worry. In fact, it is almost the opposite; I am super proud of what he does and when tourists at the pub ask what brings us to our tiny outback town of around 200 people I am often first to volunteer with pride that my husband is the town Sergeant, the OIC.

Last school holidays we were in Perth. We were at a local pub having dinner, and due to our circumstances of being there, naturally we were chatting about future plans and current happenings. I happened to mention the word “police” and “work” in the same sentence, quietly at our table with just our ears to listen, but Mr Point Five immediately shushed me and we changed the subject. Sadly I understood why. Only a week earlier, a Police accountant had been executed outside his place of work, simply for the crime of working at the Parramatta Police Headquarters. It didn’t matter WHO he was to his murderer, just what he represented. In fact, an associate of the child who pulled the trigger said on social media “Serves you right I hope them lil piggies get shot”. This man, this husband, this son, this father, was nothing more than a “piggie” to these people and he was killed simply for being associated with the thousands of our Law Enforcement Officers whom they desperately despised.

I cant tell you how sick it makes me feel to know that if someone unsavoury had overheard our conversation that night and put two and two together, my husband might very well have been attacked in the carpark or been followed home and placed his family in danger, simply because there are people out there who are threatened by the very people who are sworn to protect them.

Re-read that sentence; these people are threatened by the very people sworn to protect them.

When Mr Point Fives phone goes at 1am for him to attend an emergency job, he isn’t informed of the callers race, their religion, their sexuality or anything else. He gets told that they are in trouble and that he is needed to protect someone from being hurt or to save their life. He races out, leaving his loved ones at home with out fear or favour. He has worked 36 hours straight to bring your loved ones home. He does not discriminate on any of the above categories, and he does his job to the best of his abilities. Every. Single. Time. He will save your life if you call him. He will also write you a ticket if you are speeding; without fear or favour. I often find the people who bag cops out are those who have broken the law and continue to do so. He will still come to them if they call for help; without fear or favour. Only now he has to wear kevlar.

I have to say that after last months terror attack on our Police, I am nervous when we visit Perth now. We have long been protected by the isolation of our country towns we have lived in. If we were to meet new people, I would be extremely hesitant to tell them what my husband does for a living; we would have to come up with a good cover story. Explaining the cover story to the kids would be difficult though. I can hear them saying but why Mummy? Why cant we tell people Daddy is a policeman? Policemen are there to help people. Policemen are good. Yes, darling I know, but there are some people out there who want to hurt Daddy and maybe Daddys family simply for doing his job. But why Mummy? I don’t know darling, I simply don’t know. Its a crap world we live in my darling boy. Mummy you said a naughty word. Yes, yes I did.

The T-Shirts I wear around town here that identify me as a proud police wife (“Property of a Hot Police Officer” emblazoned on the front and “Some Women date Firefighters; Real Women marry Police Officers”) will not be seeing the light of day in Perth. No effing way. If the boys ever go to school in Perth we will be instructing them not to tell the other kids what their Daddy does. Not when we don’t know any of the other kids or, more importantly, their parents.

It is so sad that I cannot publicly display my pride in what he does, what WE do. So incredibly sad to see what our nation has become. I often rage about the American gun laws and that life is seemingly cheap over there but it is becoming more and more so over here, when you cannot even identify yourself as having one of the most compassionate and honourable professions available without putting your life and that of your family at risk from people who don’t know you or even care to.

Its a new world my friends and I don’t like it at all. If it were this world nine years ago when I met Mr Point Five, I have to wonder if our story may not even have started….. 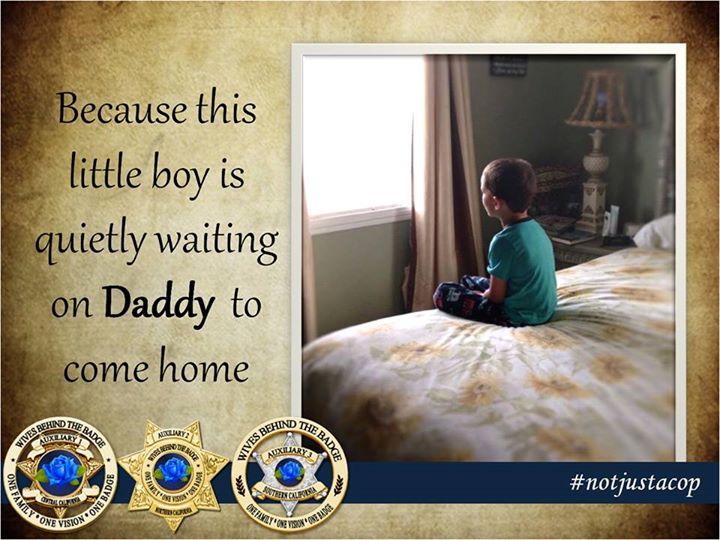 « The House that keeps on giving – part TWO
Jamberry Giveaway »