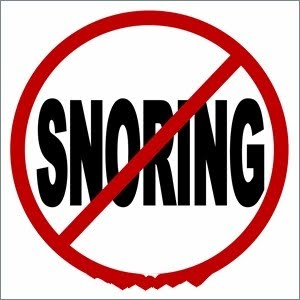 The snoring night dance – you all know how it goes.
You go to bed, kiss each other good night, he puts his earplugs in and you roll back to back.
The first few hours are OK, you are both desperately tired so you fall into a deep slumber but something, you don’t know what, disturbs you at about 1am and you are awake.
You are acutely aware that your husband is flat on his back and has morphed into a rabid snoring monster Your eardrums are assaulted in no regular pattern that could possibly be soothing.  The blend of chainsaw and choking sounds jerk at the strings of your sanity and you waver between feelings of helplessness, resentment and pure frustration. There is nowhere else to sleep, no refuge from the earthquake that is your bed and thankfully for your rumbling love, suffocation with a pillow is somewhat illegal, and not very nice.
So the dance starts.
Your aim is to get him to roll over without waking him up and without him knowing you were responsible. Like most household decisions, you need to plant the idea in his head and then let him think it was his idea to start with. You need to get him to WANT to roll over.
Step one: You tug gently at the corner of the pillow, edging it out from under his head at a few tugs a minute. The idea is that he then has to move to get back onto the pillow, thus changing sleep position onto his side and halting the snoring. This is successful roughly 50% of the time but it has a high wake up aka a grumpy husband ratio as mine seems to have cottoned onto this step. Only recommended if you are patient and capable of complete stealth at 1am. I normally skip this step and go straight to Step 2.
Step two: You twitch the doona every so often, with eventually the doona being piled in the middle of the bed. This middle of the bed bit is important as you dont want to be accused of hogging the doona if your husband wakes up. You are striving for the effect that he has simply “lost” it in the night with no responsibility landing on you. The idea behind this is that he gets a bit draughty, turns to find the doona and then rolls away on his side. This has worked with great success for me and is my favourite move. 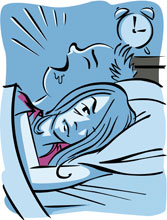 Step three: feign a foot twitch whilst rolling over yourself. You need to give a gentle, but swift enough kick to stir him but NOT WAKE HIM whilst pretending to roll away from him. If he does wake then you need to play dead – really well. Again, this is a step which I have about a 50% win/busted ratio on.
Step four: Poke him and tell him to roll over. This is basically what I do now as I have no patience for the other steps at dumb times of the morning. I do try and ask nicely and give a gentle shove, rather than a poke. Hubby wakes some of the time but mostly he just grunts and rolls over. Sometimes this is an epic fail though as he gets startled, takes his ear plugs out and becomes fully awake saying WHAT??? very loudly. It isnt a great reassurance to him that we are not being broken into, but that I just woke him up to get him to roll over.
The total bitch of this nocturnal dance is that by the time your loved one does eventually stop snoring for a limited window (usually about 4-5am after you have been up and snoozing with various children in the middle of the night), you realise that you are totally busting for the toilet. You are caught between a lake and a hard place of your bladder exploding or getting up to the loo which runs the risk of disturbing the peace you have just worked so very hard to get as he may roll over to see where you went. Most of the time I am not willing to run the gauntlet of disturbing a quiet hubby and I would rather risk a bladder infection of holding it all night. Its amazing how a pillow clutched high up between your thighs can disguise the need to pee.
Anyway – these are my tips. I have been advised to hold his nose closed BUT I really think this would not meet the criteria of the assignment which was for him not to wake up and for me not to get busted.
I reckon I would be in waaaaaaaay big trouble if I did that 🙂
Apart from death by pillow, have you got any other dance steps for me??

PS – for the record, I too snore, terribly at times, and my darling husband NEVER wakes me up to roll over. He just puts up with it, gets up or goes to sleep with G Man who kicks in his sleep. I do try and think of this as I am contemplating shoving him to roll over but it turns out that I am just a bad person and wife.

« A Day at the Circus.
Radio Pranks Calls – WARNING: ranty pants on! »