Will you marry me??

My post How I met my Husband – shhh its a secret got so many nice warm comments that I thought I would follow it with the story of when I proposed to my Mr Point Five.

It was the anniversary of our engagement yesterday ( I was reminded by hubby eating a Drumstick for dessert and me asking what the special occasion was and his reply “it was five years ago today that you asked me to be your husband – I cant believe I said yes!”) and coincidently it was Easter Saturday and the West Coast Eagles first home game at Subiaco oval was on the telly.

Let me explain the relevance of the latter coincidence 😉

Hubby is a huge WCE fan so I thought it would be cool to see if I could organise an American style “WILL YOU MARRY ME?” on the big screen at half time. We had only been dating for 7 months, but I KNEW he was my Mr Right ever since the day after our second date when I tried to break up with him and he wouldn’t let me. I thought I had too much baggage with an ex-husband yadda yadda ya, and was too old for him (I am 5 and a half year a cougar) but he called Bollocks and moved in after the next date. Also, I was fairly sure he wouldn’t say No with a live audience of 40,000 Eagles fans 🙂

So, the PR department of West Coast was lovely – her name was Rachel from recollection and she said if she knew our seat numbers and if we promised to be in them at half time then it was game on!

So I told EVERYONE I knew what was going to happen. I rang the prospective in-laws and told them; told my parents and all the girls at work; bought two matching wedding rings to propose with and booked a restaurant in Subiaco with family and friends for after the game. Even organised for hubbys best mate who was coming to the game (along with half the aforementioned crowd who got tickets) to pop over to say “Hi” at half time and I was going to “show him my new video camera” so he could catch it all on film.

I ALSO had to come up with a convincing story to keep my future hubby in his seat at half time without making the standard trek for half-time beers – any ideas???

I told him that I had entered an awesome competition which required BOTH of us to be in our seats at half time as that was when it was going to be drawn.  Ha-Haaaaaa!

So there we are, in our seats with hubbys mate over for a chat and Karl Langdon (an ex-Eagle player for all you Eastern Staters) is on the mike saying that there is a lucky couple in Block 144 (I still remember). Hubby got all excited and turned to me saying “that’s OUR block honey, we could have won!!”. Then Karl says is there a *insert hubbys name* in the Audience???  Hubby turns around looking for the lucky winner with the same name as him and then he see’s it……… 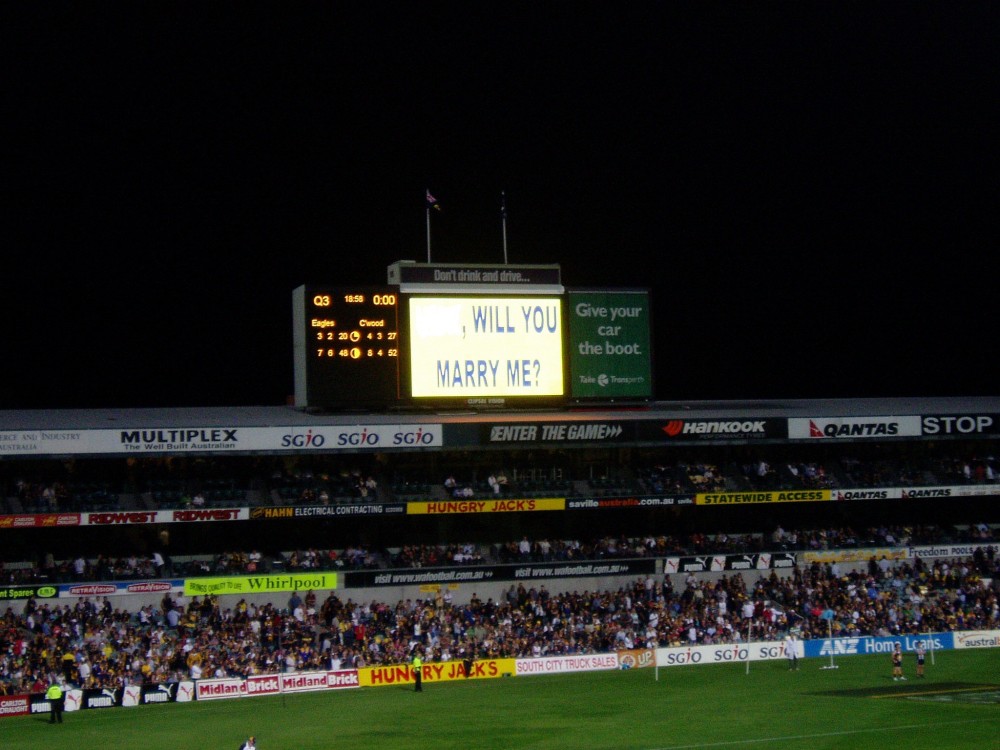 and then on the big screen he see’s this….. 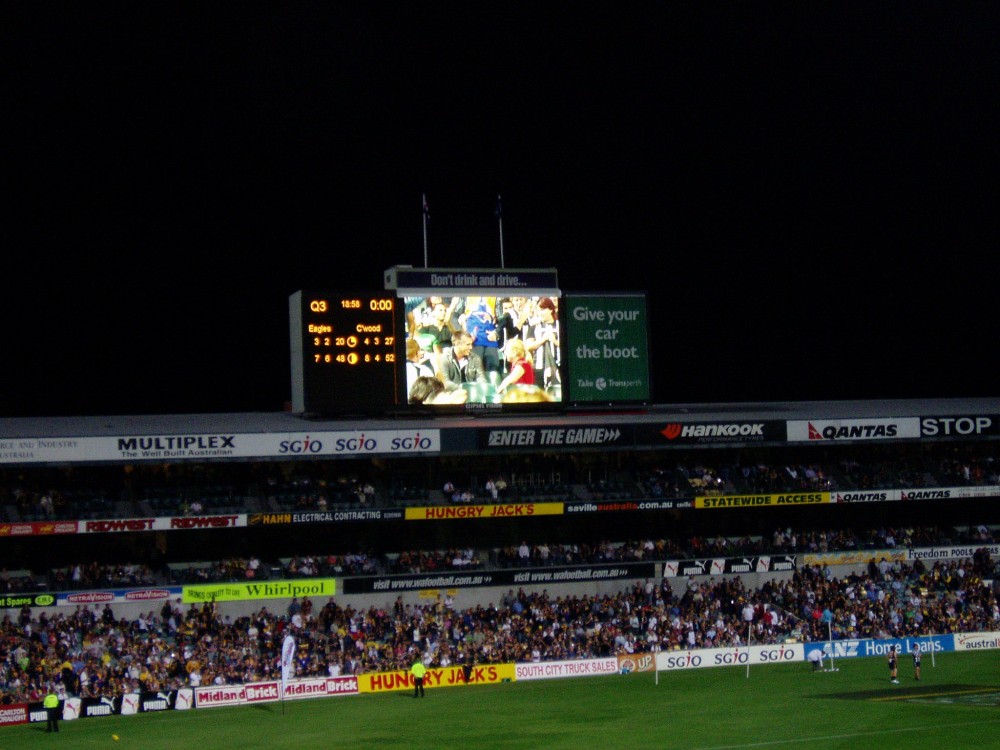 He looks at me. And he looks at the big screen (I had my back to it and didnt even realise that we were on – I thought the camera stopped at the actual words)

Then he looks at me. And he looks at the big screen. He is flabbergasted. This was not in the half time programme.

He looks at himself on the big screen and he looks at me on my knees.

His face is like a cartoon character that just had his favourite dinner snatched from under his nose.

Karl Langdon is on the mike saying “…and is the young man going to give the young lady an answer???”

I am looking at my honey and willing him to get his shit in a pile and finally, FINALLY with 40,000 people as my witnesses he says YES!!!!

He is still looking like a deer in the headlights my poor, poor love. What a competition he just won! 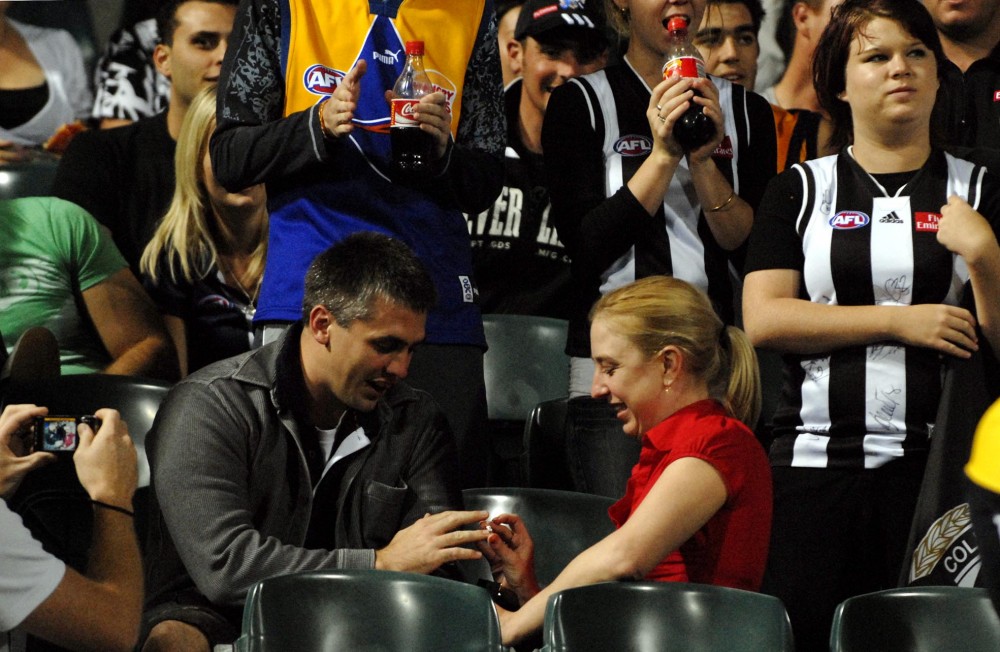 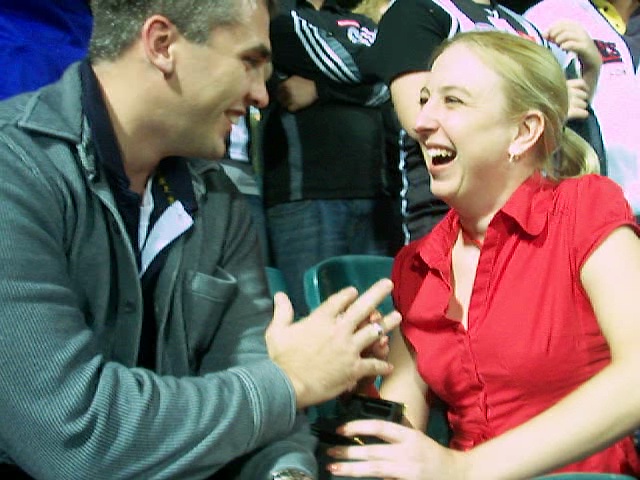 He couldn’t believe what I had just done…. 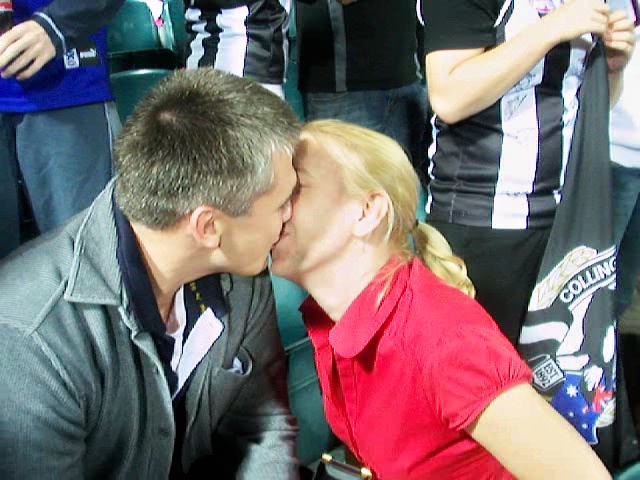 And sealed it with a kiss….. 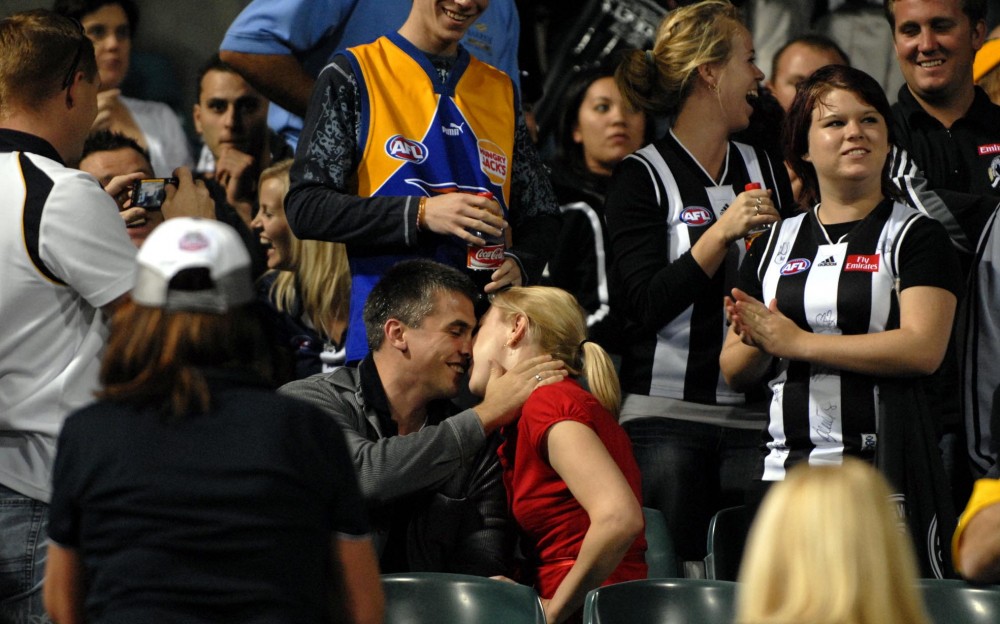 PHEW!! He is smiling and is wearing the ring.

Lots of applause from the crowd and a few free drinks from some spectators. We dont remember the final score but the Eagles won the game against Collingwood – we do know that. What a bad omen if they had LOST?!

And so, girls, that’s how it is done!

Mind you, he still doesn’t let me forget that I LIED to him to do this but I reckon Meh – it was for the greater good so it doesnt count right??