’til Kitsch do us part…

Two Point Five Kids February 16, 2012 ’til Kitsch do us part…2014-02-02T22:41:54+08:00 Uncategorized 3 Comments
Is anyone else here a hoarder?  I am and so is Mr Point Five. This is NOT a good combination as neither one of us can bear to throw stuff out. His excuse is that it may be “useful” one day; things like decorative tins, those cloths that wipe your sunglasses, DVD cases, ANY piece of paper that looks official…….he says “keep it, it could come in handy one day”. 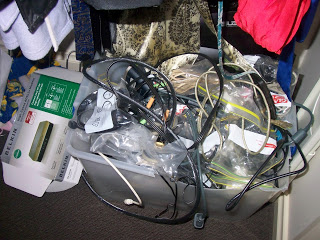 This tub of electrical cables is a prime example of what MAY be useful at some point and we lug it from house to house with every move….
My excuse is that I can’t bear to throw out anything sentimental such as these which are on my kitchen ledge looking down on me as I type…. 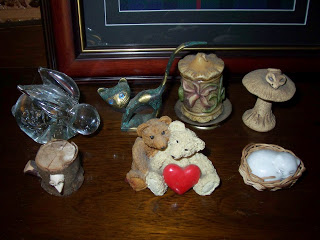 See the dust on them??? I think there is a strand of cobweb between My Bunny’s ears.
The glass bunny I got from a primary school friend for like my 10th birthday or something like that, the bronze cat I got from my ex-mother-in-law, the candle I’m not sure where but I like it, I bought the mouse on a mushroom from a craft shop when I was little, the cat in the basket my mum gave to me at some point in my childhood, I cannot remember which boyfriend gave me the teddies and I have no idea where I got the mouse in the log but isn’t he just precious???
Then there is the plain revolting which I like to think Mr Point Five holds all the cards to. 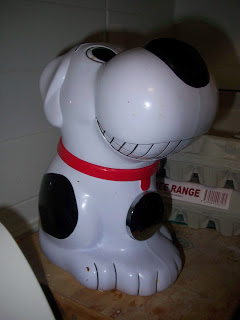 Such as this Cookie Jar…..
It plays “who let the dogs out” and “you ain’t nothin’ but a Hound Dog” when you open its mouth for a cookie and it is so gross BUT I am not allowed to throw it out on threat of divorce and it sits pride of place in my kitchen. Erghhh. The plus side of this awfulness is it is nearly impossible for G Man and Master J to sneak cookies from it without me hearing 🙂 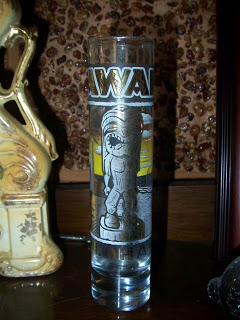 THIS vase that my interior decoratively challenged husband bought in Hawaii and he insists it being on display in our home….
Again, I live under threats of life as a single mother if I destroy it. Isn’t it totally kitsch and god-awful??
I did throw out a precious heirloom of my husbands when we moved house the first time and I am yet to live it down. It gets brought up on many an occasion and I wish I could say I am guilt ridden, but I’m not.
I’ll explain.
It was one of those things you get in a $2 shop to play at a teen drinking game (hubby was in the army before he met me so I use to genre of “teen” loosely. I’m sure this was well used into his early twenties). I can only describe it as a Russian Roulette thing where you all get roaringly drunk, stick a finger in and then press a button and one of you gets a random electric shock. A real immature boys thing of which I had never seen him use in our relationship before the packing of the house. I was positive he would get no further use of it, would not even miss it nor even realise it was gone to start with. So I ditched it.
O.M.G.
He noticed.
Within 2 days of us unpacking at the new house.
“Where is my electric buzzy drinking game thingy” he asks of me. “I want to show it to the guys at work”. I feign ignorance, deny its existence,  plead innocence, tell him it must be in storage until finally in the wee hours of the morning and him foraging through every single mother of a box in the bedroom with the lights blazing I confess.
O.M.G.
Needless to say I won’t be doing that again. He was the personification of the offspring of a bear with a sore head mating with an elephant who never forgets and five years later, with accusing eyes when he is reminded of it, I still rue that day if only with a perfunctory eye-roll and a “Yes Dear, I’ll never do that again”
Hmmm – maybe I can palm a $20 to the removalists for the next move to leave the bubble wrap off the Hawaii vase.
Now there’s a thought.