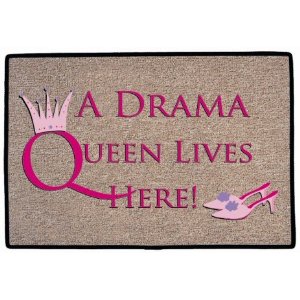 I have experienced two births and both were total shit. I agreed to the second bub with the hubby thinking that “they” (you know as in “they say that….”) were right in that the second one was quicker and less painful than the first, which was excruciating. If someone had handed me a loaded gun I would have pulled the trigger to stop the pain. Both times. Did I mention the midwife called me a drama queen??

Birth Plan:
a) to get through it with as little pain relief as possible. I was very open to gas, a bit nervous about anything ending in “eine” and wanted to avoid the epidural if at all possible.
b) no rips – vagina to be intact.
It all started on a Friday night, March 7th 2008.  Mr Point Five had left for night shift at 11pm and I had stayed up for a movie and went to bed about 11.30pm. NB: I think that was the latest I have stayed up since. I got up for the loo 15 mins later and had my waters break everywhere!! Thank Christ it wasn’t in the bed which I had made up with tarpaulin underlays (crunchy) for the past week. No labour pains at this stage so I rang the hospital who told me to go to bed for our last full night sleep and if contractions hadn’t started by 8am to come down to be induced. So I rang the hubby’s work who radioed him that my waters had broke and he had to come home. Would have LOVED to have seen the look on his face as well as his colleagues in the car!!!
About half an hour after he got home mild contractions started and there was no way I was going to get any sleep.  Mr Point Five went to bed to attempt sleep but after about 30 minutes he got up with a goofy look on his face and declared he was too excited to sleep. We dozed and pottered and had cups of tea and went over the contents of the Hospital Bag a million times.  Went to the hospital about 6am cos the contractions were quite painful and I was starting to wonder where we were up to, surely we must be half way there, the pain couldn’t possibly get much worse could it?
When we got there we were only 1 bloody cm dilated!! Are you freaking kidding me??
Had a bath there with relaxing music and at about 8am I was carrying on like a two bob watch so Mr Point Five got a midwife who gave me some morphine as there was no gas in the bathroom and they weren’t ready for me yet in the delivery room yet.  Morphine is interesting – it certainly distracts you from reality and takes you away with the fairies but when a contraction hits you are ripped from the fluffy clouds of delusion and completely engulfed by the sheer pain of what feels like your labia being pulled up and over your head. Then its gone and you are floating on the clouds for the next 2 minutes before you get ripped down again. I’m not sure if the feeling of euphoria is worth it for the total shock of reality in excruciating spurts.
So, we are moved to the delivery room and at about 10am the midwife came in right at mid-contraction enquiring as to whether we would require the anaesthetist for an epidural. Apparently I wasn’t very polite in my demand request for it. Hubby says I swore like a stuck pig and said fuck more than a few times and basically threatened assault on her if I didn’t get one soon.
So that’s a “yes” she says with a tight smile?
Got the epidural at 11.30am when we were finally 4.5cm dilated and sheer bliss descended; as my best friend said “you don’t go home with a prize for who can go through the most pain”. 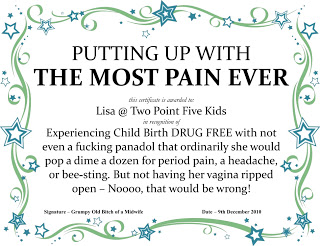 It was soooooo nice to be able to relax and let my body get on with the job of labour without fighting it. I could finally cat nap a little (remember we hadn’t slept at all the night before) and hubby could doze off for a few hours without my crying and sobbing and screaming. At 3pm we were measured and ecstatic to be 10cm dilated. Hurrah! Mr Point Fives parents had arrived from Onslow (a 5 1/2 hour drive) and popped their heads in to wish us luck for the final push over the front and half an hour later we were holding our little man.  I am so grateful I didn’t crap myself because it felt exactly like pushing a massive poo out, in fact that’s what the midwife encouraged me to emulate.  Also totally grateful there were no rips – like my vagina, at least one part of my birth plan was in tact. Once his head was out hubby actually was allowed to guide G Mans little ( 6 pound 7) body the rest of the way out and handed him to the midwife who wiped him over and then let him cut the cord. Little G Man was then popped straight on my chest for some skin to skin contact. Unimaginable Bliss. 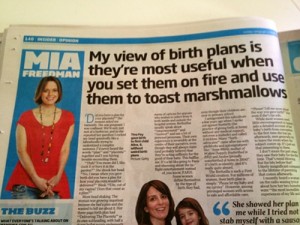 Birth Plan:
a) to have epidural as soon as humanely possible
b) no rips – vagina to be intact.
Very similar timeline to Birth One – waters broke again about midnight (going to the toilet once again) and as “apparently second births are quicker than first ones” AND we were a two hour drive from the hospital we rang and were told to just come straight up. By the time we had woken the parents-in-law who were staying with us pending the arrival, nervously kissed our first born goodnight and driven up it was about 3am with mild contractions just starting on the drive up. My mind was exploding with pure fear for the next 12 hours – I didn’t honestly think I could go through it again but at least I knew I just had to make it through til I was 4cm and then I would be OK and in epidural heaven.
Anyway, long story short, I was only 1cm when we arrived and had some gas which really did bugger all. Even Mr Point Five struggled to notice if it was actually working. The contractions dropped off and eventually stopped about 9am and we felt as useless as tits on a bull as we loitered around in a room just waiting for them to start again. As my waters had already broken we couldn’t go home and the midwife told us that if the contractions didn’t start again soon I would be induced. About 3pm they hit with a vengeance and once more I was measured by the wicked witch of the west midwife and was still a lousy 1cm.
By 5pm I was begging for an epidural. I was screaming with every contraction and the pain was simply unbearable. I don’t use the word unbearable lightly. If I could have knocked myself out I would have, it was truly horrific and when each spasm finished I was already crying and bracing myself for the next, whimpering “no, no, no” and clutching hubby, telling him I just couldn’t do it.  I was literally beside myself with each one, begging inbetween for that blessed epi relief. But the wicked witch midwife wouldn’t authorise one. She constantly told me that I wasn’t dilated enough to have one, although she hadn’t measured me since 3pm,  and chided me that birth was painful, didn’t I know? Unbeknownst to me hubby heard her refer to me behind the delivery room door as the “Drama Queen”  and he marched out the door and gave her an arse ripping. I knew nothing, thank God, literally delirious with agony. It was humiliating enough going through all this in front of strangers, let alone to be ridiculed for it. I wanted the world to swallow me up already without hearing that. Childbirth takes you to primal places you do not recognise yourself in, nor do you want to.
I wouldn’t wish childbirth on my worst enemy.
By 8.30pm the bloody midwife (still without measuring me), finally caved to my Diva Demands and sent for the anaesthetist who arrived and administered the epidural about 845pm. I do recall proposing marriage to him, with hubby right by my side amidst a flood of grateful tears. Honestly I don’t think I have ever felt such total relief – I went from being utterly traumatised to the sweet bliss of just…nothing…. I was drained, mentally and physically and just wanted to pass out.  We had both been awake for nearly 40 hours and we were both shattered.
At 9pm, there was a shift change and a new midwife came in who measured me and asked me if I was ready to push as I was 10 am dilated! Fifteen fucking minutes after the epidural! I cannot tell you how pissed off  Mr Point Five and I were at her predecessor at that moment.
So, I pushed a few times and Master J literally just popped out with hubby once again allowed to do the latter part of the delivery himself and cut the cord. A sweet little 6 pound 6 babe and only one part of my two part birth plan intact.

So, there you have my two births. I am still totally fucked off, to put it mildly, at the midwife for turning what was already an expected stressful and painful experience into total and pure hell and giving me such negative memories of my second sons birth. It could have been so much easier.
Also, please don’t let me put you off if you are yet to have children. I have heard fantastic stories of less than two hour births with no pain whatsoever. Cereal! Some women I know just feel a bit of discomfort and liken it to period pain. They said it wasn’t “that bad” and did it with no pain relief at all. I had one or two in my last playgroup in Boddington. I wanted to punch them. But then again, I like a bit of drama, so my second midwife says.

« Twas a week before Christmas…and I forgot my damned list!
Resolution shmesolution. »