Due to Master J’s perfectly awful stress hives/bedwetting regression/unsettled behaviour from the past three months of upheaval and uncertainty, the boys and I left Mr Point Five up in our old town to sort out the packers whilst we drove 650km to Perth three days early with a trailer and a screaming cat. Half way down when we stopped for fuel, I received a call on my messagebank from the cattery which was left two hours earlier, wondering what time we were arriving as they were about to close. After a flurry of messages to, and phone calls from a mate a few towns down, the lovely cattery owner agreed to meet us there after hours on a Sunday to take the screaming Hiccup off my hands. Thank you Mary from Northern Districts Cattery, you truly saved my sanity on a massively stressful day!

We spent our last night in our home town at our gorgeous friends house, (remember the one who saved us from the house chaos in my earlier post) having dinner with the close mates we had made over the past 12 months. So that made eight of us, including us and the boys. Yep, we had four mates that we counted as close enough to spend our last night with.  I have always maintained that if we can leave each town with only one good mate that we can count on for life we are doing OK and we made four. 🙂 You know who you are and we will miss you terribly. xxx 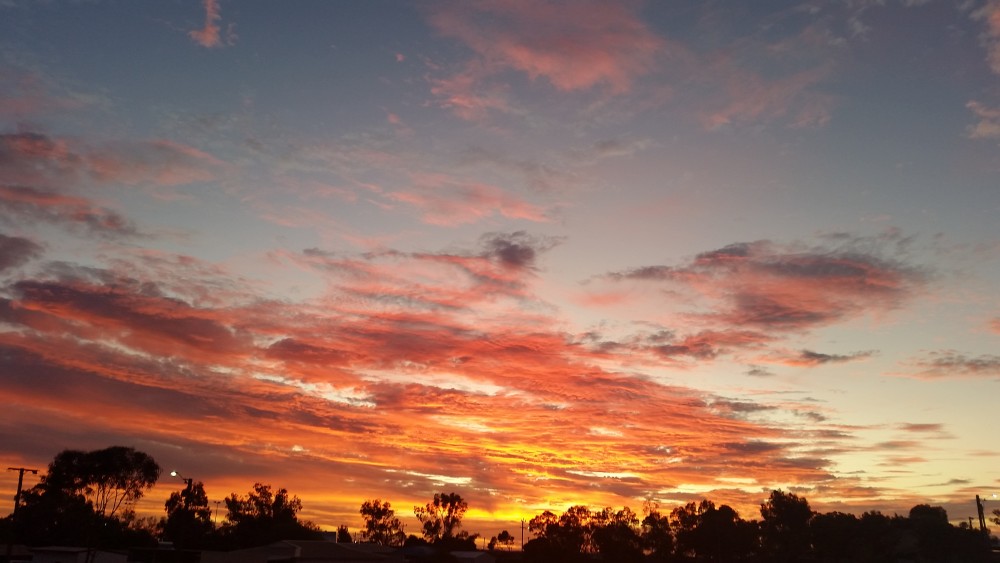 After a hurried last minute shop in Perth, Mr Point Five arriving, and a quick catch-up with friends/birthday party for Master J, four days later we were in convoy to our new town, a further 600km from Perth again. We arrived at our new house late in the afternoon, had a brief look and discussion as to where the big items of furniture would go, left Hiccup with a bed and some food, and then checked into the town motel with Xena.

Next morning, Friday, we were back at the house by 730am to meet the movers and by 230pm all our belongings were in a hundred or so boxes in our new home. Hiccup, who had been relegated to the en-suite bathroom for this duration was set free and was happy to have the run of the house and a good old sniff around. Two days later we opened the cat door to the great outdoors and Hiccup has been a happy cat ever since. 10 days later and I am proud to say Xena has only had 2 accidents inside, although we have lost half our dirty washing from the laundry, Yoda from the boys Star Wars Christmas Tree, my mobile phone,  various shoes, most of my bras at some point or other random items to the backyard. All have been recovered with only minor damage to some items. It appears she relishes the whole “trophy collection” idea rather than the actual chewing of the item. Bloody dog. Every day but one we have taken her either to the beach or the dog oval to run off her energy but she seemingly has plenty to spare! 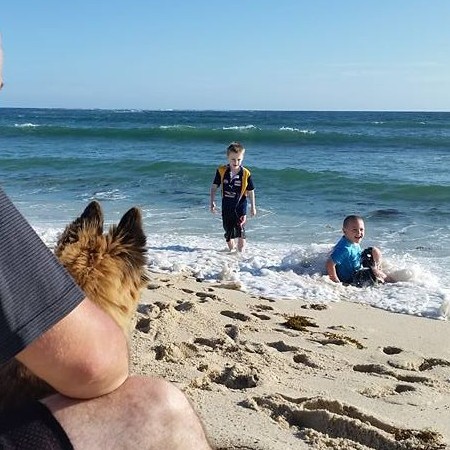 The other copper in town and his wife popped round about 430pm or so with a bottle of wine to say “Hi and Welcome” which was lovely. With it only being a two man station it is nice to meet the fellow your husband will be trucking around with and his wife who will be enduring the same shitty shifts as yourself.  🙂

Two days later I took G Man to school to finish up year two. His teacher was really welcoming and even managed to squeeze him into their end-of-year school concert which was only three days later!! Despite initial nerves, G Man has really settled into the school and looks forward to going each morning. I have found it really welcoming and caring and I know that the boys will remember this school and little mates made here with great fondness in the years ahead. Master J went the next day to finish off Kindy and despite also being very shy to start with, has thrown himself in with gusto. After two days his Kindy teacher said it was like he has been there all year. I have to say I am so very proud of both the boys with the way they have coped with the past three months; being turfed out of their home, living out of a suitcase, stressing in their transit house, settling into their fourth and fifth new town respectively…..these kids are amazingly balanced and adjusted, and still friendly and eager to push ahead with whatever we throw at them. This is G Mans fifth school he has attended and he is only just finishing year two!

I am still pinching myself that we are here. As I have mentioned before, due to the inadequate schooling up in our last town, Mr Point Five and I were seriously considering relocating the boys and myself down to Perth for next year whilst he finished his tenure 650km away. I am so grateful we are no longer faced with that decision and that the school down here seems just magical. I love that the kids here can strive for excellence in history, geography, art, maths and english and not be rewarded for simply attending school as was the case in our last towns’ school. I cannot even begin to express to you the lifting of the Mother Guilt I had in me by keeping/raising the boys up there. I will admit, a few tears slid quietly down my cheeks when we attended the School concert on Thursday night just gone, sans hubby as he was being Santas escort in the neighbouring town. The love that you can feel from the teachers towards their charges was truly heartwarming and it honestly cemented our decision to be here, if we needed any more affirmation. After our last year of schooling I felt so reassured that our boys would be looked after and receive the best regional schooling possible. I honestly feel like crying with relief, simply driving down the street here. My boys’ life starts NOW.

Last Sunday, two days after we moved in, we put up the Christmas trees (yes, plural, one Star Wars and one Traditional) and decorations to give the boys a sense of Christmas and stability. We were only 6 days late but that meant they got to eat six advent chocolates each on the first day 🙂 Sheldon, (our EOTS) managed to find the boys here too so that helped with the transition. 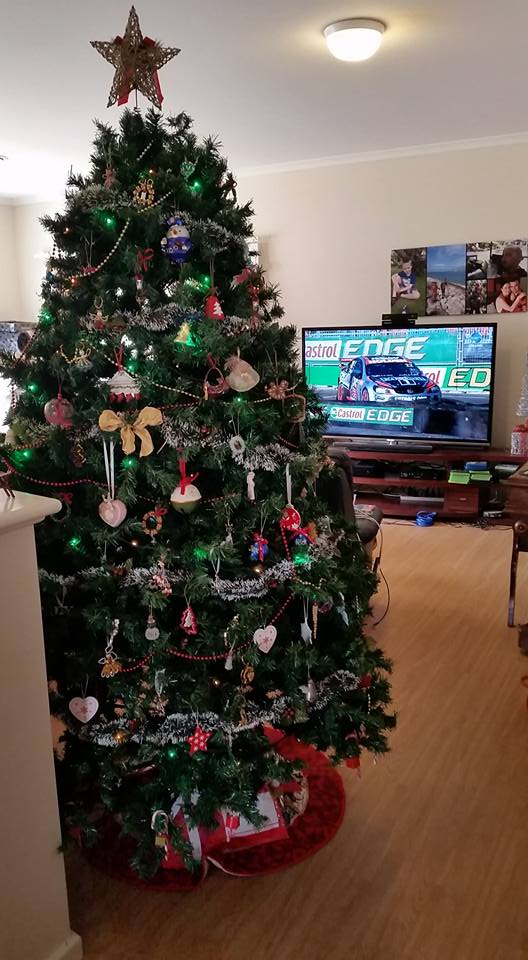 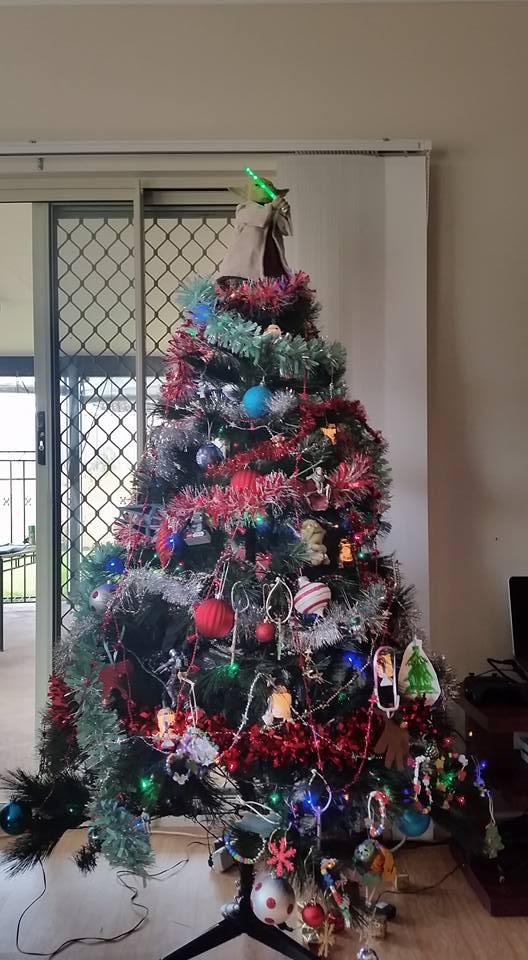 Star Wars Tree – close up of figurines on my facebook page.

Friday just gone ( a week after we had moved in) was the night Santa came to town. He is driven on the back of a flat bed truck and pulled by kangaroos. For the first time ever the boys scooted and rode out on their own street with other neighbourhood kids for an hour or so whilst they waited for Santa and his elves to arrive. The kids were uber excited to see their Daddy as his escort (I think he MUST be the real Santa Mummy, if he needs Daddy to make sure he is safe) and after getting home and into bed, G Man declared this night to the the “best night ever” of his nearly eight year existence. Just goes to show you can never underestimate the value of simply trucking around with your mates, albeit ones you only met four days earlier. Master J gave me a coronary by continuing to follow Santa past our house for a few blocks down without me noticing. Its always a great look for the new Sergeants wife to be running down the road and screaming at her child to “come back here or there will be trouble!” 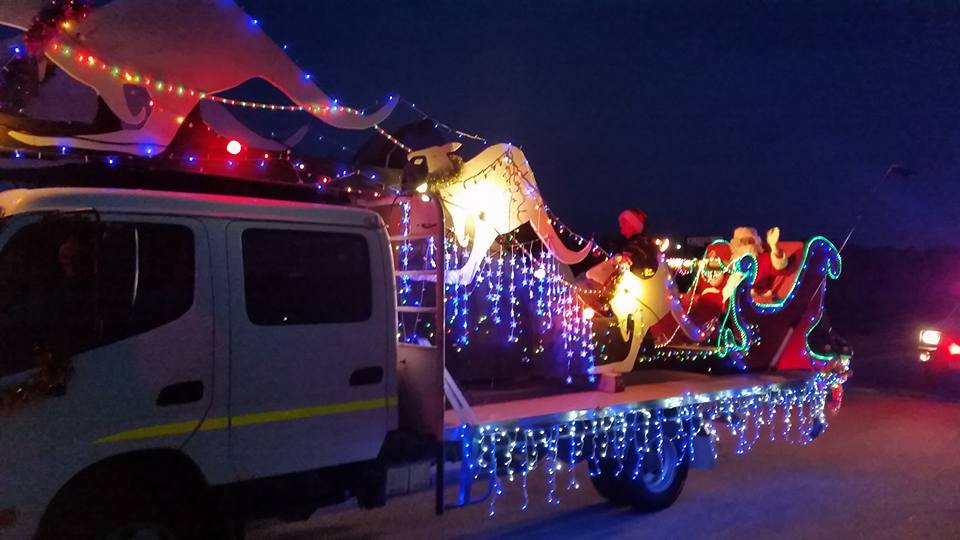 Saturday was “Santa in the Park” where the boys got to meet Santa and he gave them both a present which I had dropped off to the local daycare centre the morning after we arrived in town. It helped to be hell-organised by joining the local town facebook group before we left and noting the occasion, buying the presents in Perth, sneaky-sneak wrapping them at the in-laws and then hiding them in your suitcase for immediate availability upon arrival – the things us Mothers have to think of and carry out blows my mind, honestly. 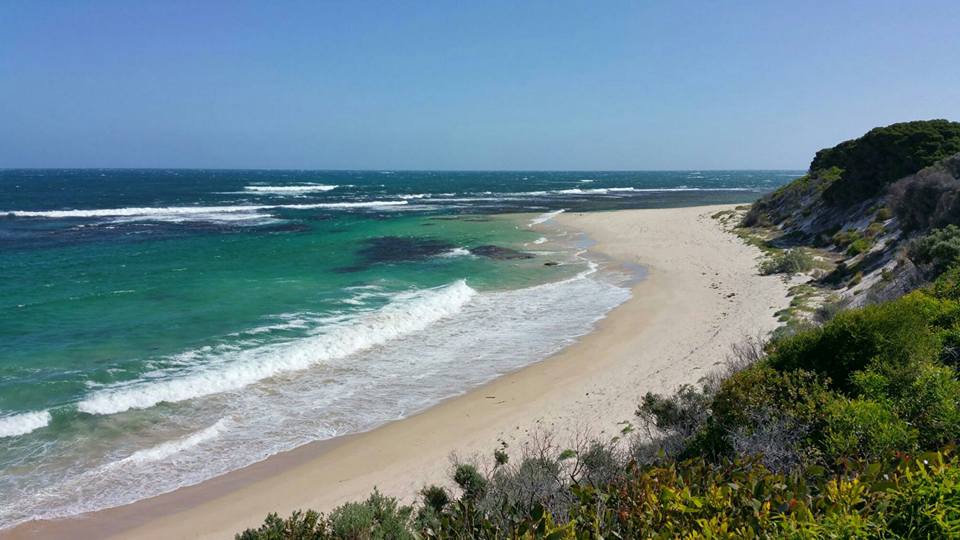 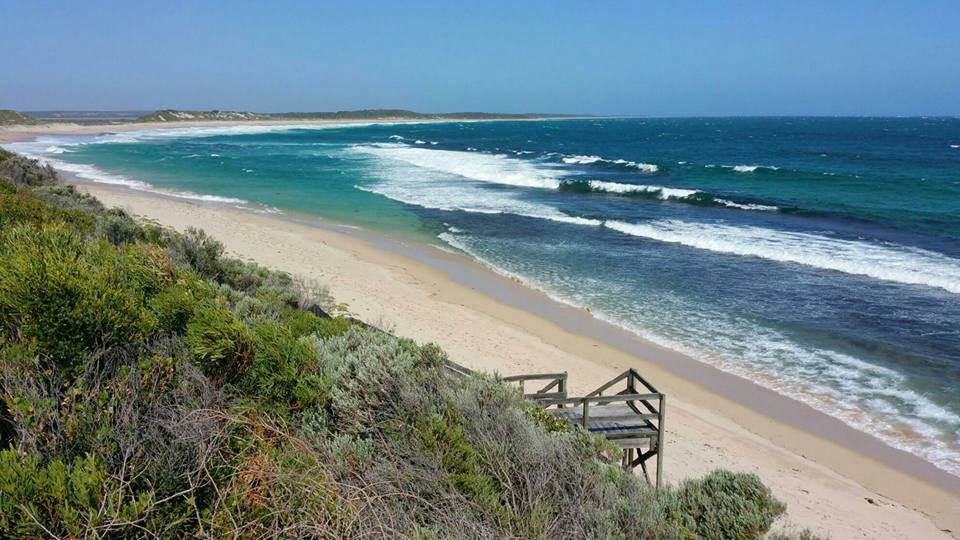 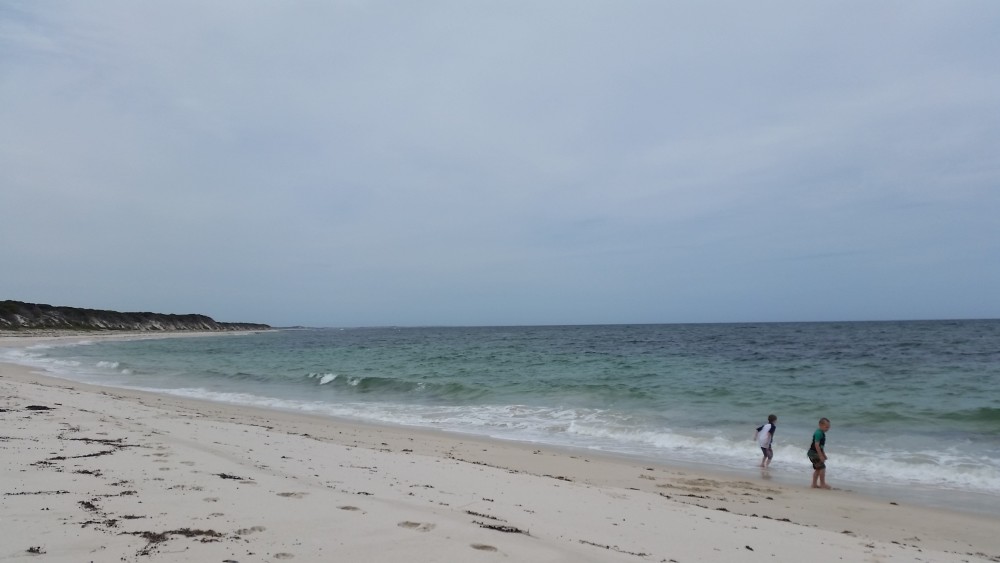 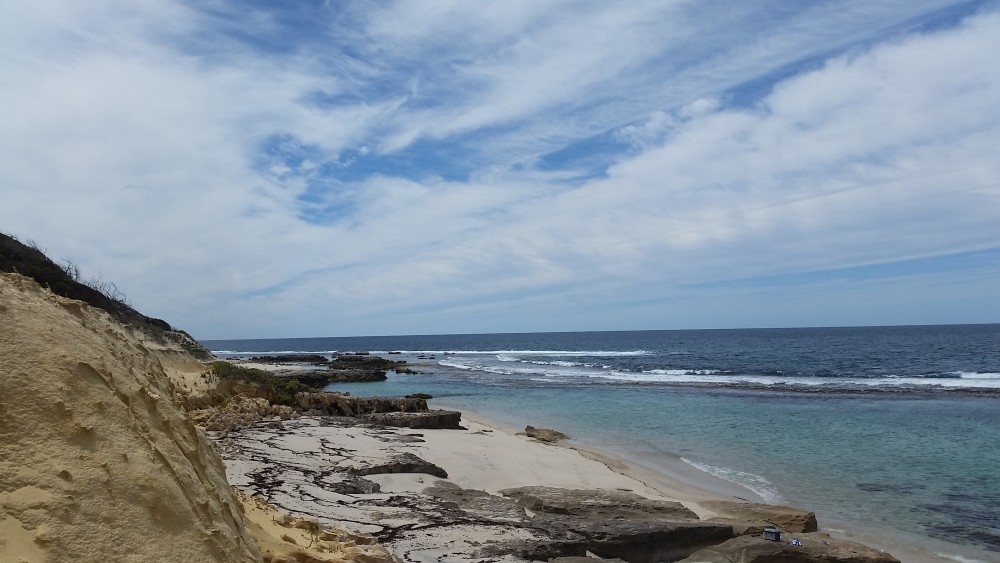 Some of the local beaches… 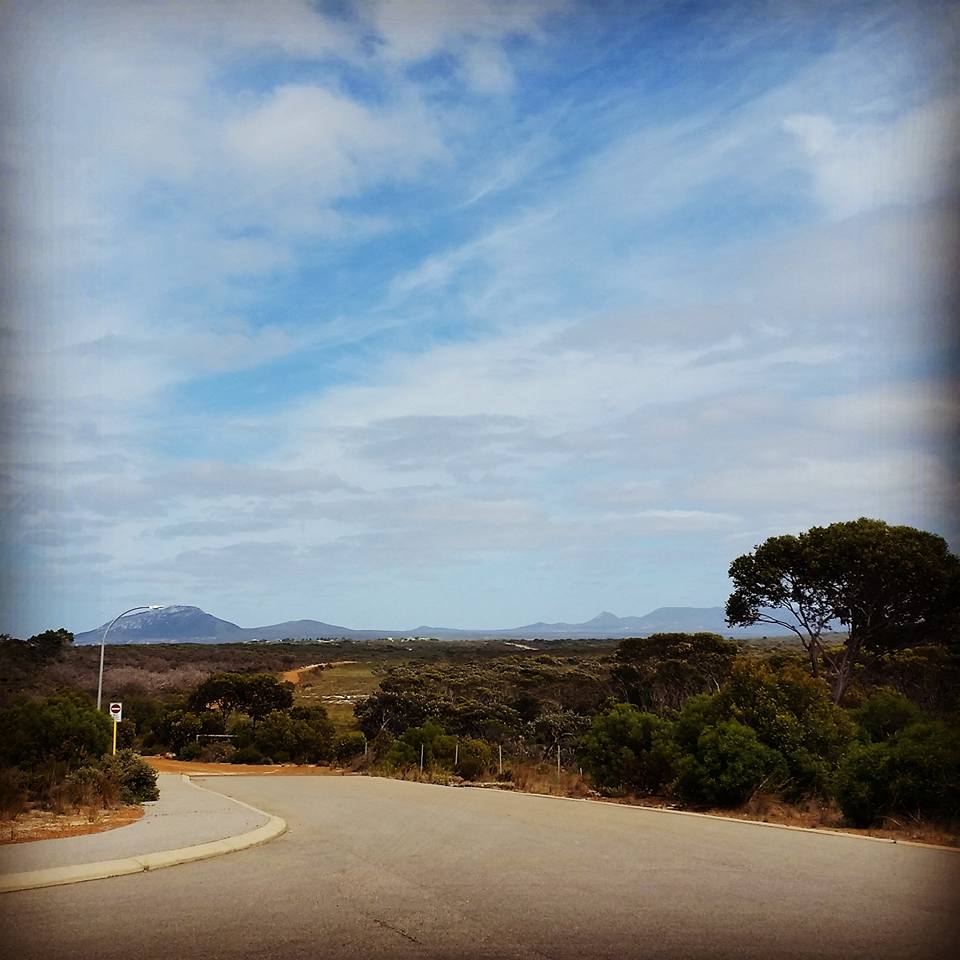 View from the end of our street… 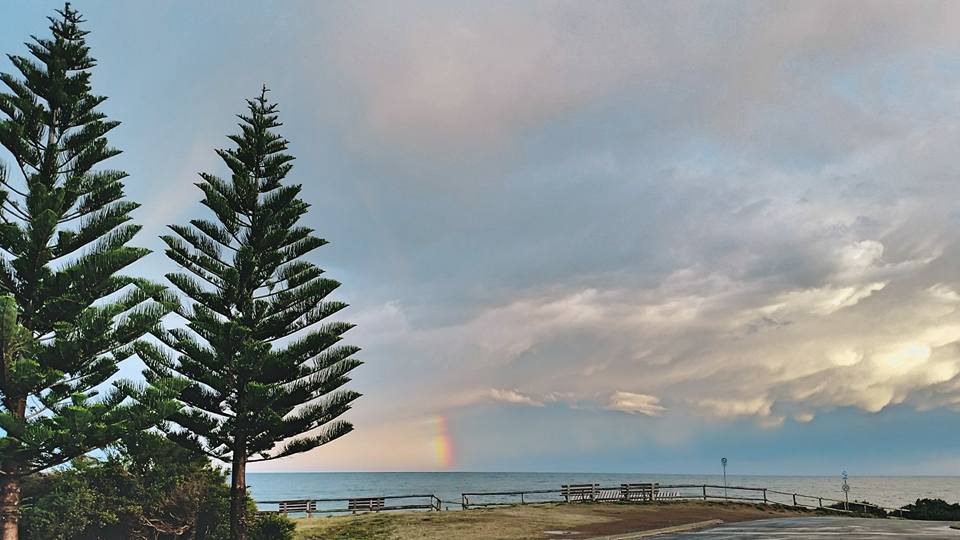 View from the Pub… 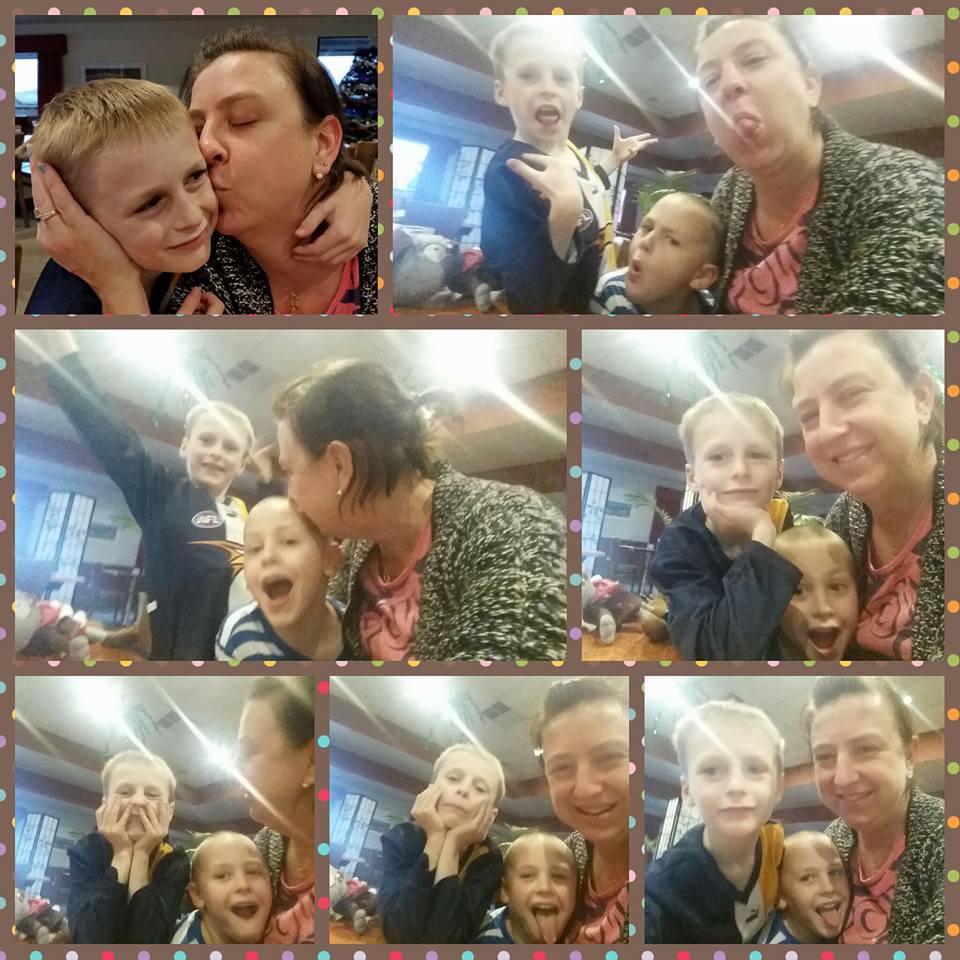 So there you have it. We are here in paradise, a million miles away from the desert. Tenure is 2-4 years, so we will definitely stay at least two years and if we like it enough we have the option of four. I can honestly say I can see us very happy here for the full four years but we shall see as to what opportunities arise. As Forrest Gump said; Life is like a box of chocolates; you never know what you are going to get.

« Jamberry Giveaway
Because he’s mine, I walk this line. »