Behind the Badge – RUOK?

I recently came across some statistics on police suicide which I wanted to share with you.

Does that freak you out? Freaks me out.

To make this figure worse, police are psychologically screened before they are accepted into the academy so they are predispositioned to be more “stable” than the general population.

More police die from suicide than the felons they are being attacked by. I actually have a higher chance of losing my husband to suicide than being killed whilst on duty by a perpetrator. 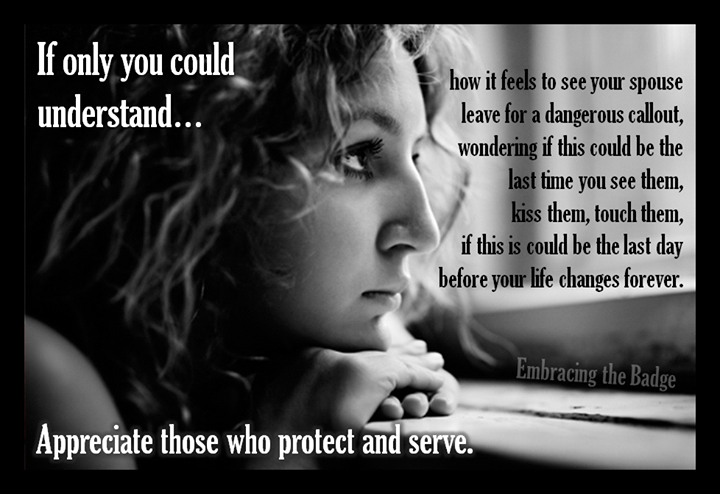 Many police officers see the grim underside of life that most people rarely see. Nobody calls 000 for anything good.

They are usually first at the scene to gruesome traffic accidents, when wives are beaten to within an inch of their lives, when addicts die of an overdose or when violent situations get so out of control they are the last resort. Day after day, year after year, it all takes its toll on even the most “stable” officers.

I guess what I want to say is try to remember that there is a human behind the badge. That person you called an arsehole to your mates? They are a husband, son, father, wife, mother and daughter who has loved ones at home. They are a person, doing their very best every day to ensure our safety.

If you are picked up for speeding (don’t speed and it won’t happen) or talking on your mobile in a car (seriously, just DONT, think of the other people in your car and on the road that could be killed by your inattention) and get given a ticket, please take the time to thank the officer. Yes, that’s what I said,  as you humbly take your ticket, say Thank You.

I can only whisper the words “stay safe” as he walks out the door but according to the above statistics, you can do more.

Say Thank You for keeping us safe even though they get abused every day for doing so, both physically and verbally.

Say Thank You for going out and witnessing all the terrible things they do so that it (hopefully) doesn’t impact on our lives.

Say Thank You for pulling that dead body out of the car wreckage, for knocking on that front door at 2am and telling parents the news that we couldn’t bear to deliver, and for going to that callout to the same situation, time after time that is so sad but is out of their control to stop from happening again and again.

Say Thank You for going above and beyond their daily shift even if it meant their family woke up Christmas morning without them.

Say Thank You for doing all that they can to save us from ourselves.

You say Thank You to your doctor for saving your life, why not a Police Officer? What’s the difference? They are out there saving lives every day.

You never know; your acknowledgement and appreciation of all the good the Police do could really be what they needed to hear; they don’t hear it very often.

Your Thank You could make all the difference in the world in that moment to the person behind the badge.

It may even save a life.

* Statistics from: POLICE OFFICER SUICIDE: A review and examination using a psychological autopsy.